I was curious about the Starrigavan valley landslide, so this past Wednesday morning my kids and I went out to see what we could see. We were not the only ones, as we passed another father with kids and a couple with a dog both coming back. I noticed an aerial photo posted on the gate that had the atv trail system with indications of where the trails were impassable. It appeared that a shorter section of lower trail was compromised, with a much longer section of trail a bit further up no longer passable. 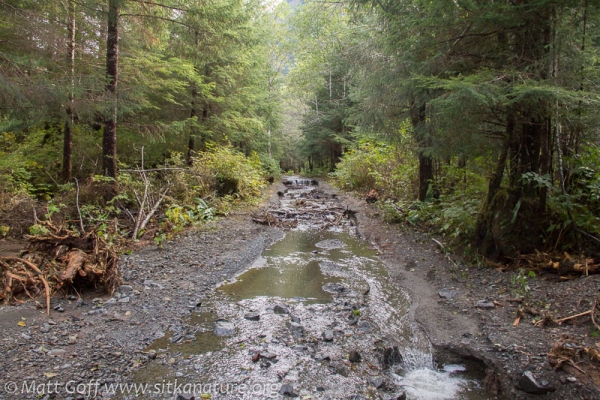 ATV trail transformed to a stream

Walking up the beginning of the trail, there was only occasional evidence of recent high waters. Some clear signs of deep puddles (now mostly dry), and an occasional bit of eroded trail. We experienced occasional pulses of noticeably warmer air that I think probably were due to irregular mixing of warmer air above with the cool air that had settled into the valley.

The first sign (though we didn’t know it at the time) of our approach to the landslide was the strong smell of wood. Cedar was very apparent at times, but it didn’t seem to be only the smell of cedar. I couldn’t quite sort the mix of smells that we were passing through, but it was fun to try.

We passed the junction with the south trail and went a little further to find a culvert that was almost entirely exposed, with the trail above it having been converted to a stream channel. We did not have much trouble picking our way along the edge of the former trail (now stream). As we walked up, we had occasional glimpses of a larger amount of water flowing through the adjacent forest, so apparently only part of the flow had been diverted onto the trail. 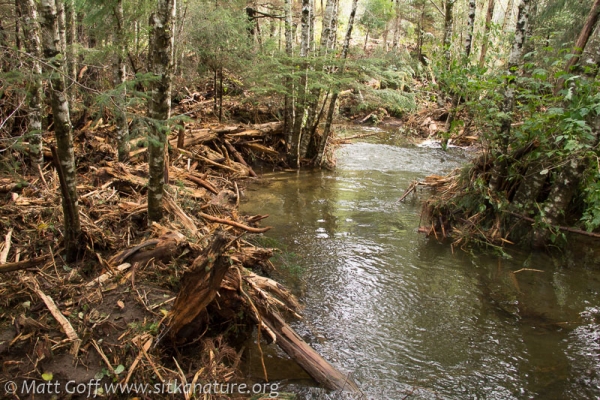 Debris piles in the forest

It did not take us long to get to a point where the trail was no longer apparent. The water at this point was much deeper, and there was much debris piled around the bases of still-standing trees. It seemed apparent that there hadn’t been a devastating slide/debris flow here (or the trees would have been gone), but we were getting close to the end of the run out. Most of what was piled here was was fairly small woody material that I am thinking probably floated in and collected when the water was at least a couple of feet higher. 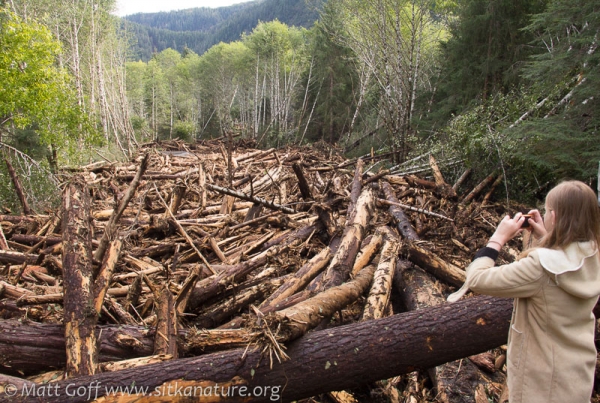 It was a little trickier crossing here, but both kids found (different) places to do so, and I just opted to take my shoes off and wade across a shallow spot. From this point it was a short distance to a massive pile of logs. We couldn’t really see how extensive it was until we climbed up on some near the edge. At that point it became apparent that this was probably the source of what we had been smelling early. Cedars, spruces, and hemlocks, most at least a foot or two in diameter were jammed together in a pile that was probably at least 10 feet off the ground in places. The chaotic tumble that these recently standing trees had undergone to reach this point had left the bark damaged or missing entirely, exposing the fragrant bearing wood to the air. It was hard to comprehend how this might have happened without a massive amount of water. The wood seemed fairly clean. If it had been placed here while entrained in the landslide/debris flow, I would have expected more dirt and smaller bits of debris to be present. My best guess at this point is that there was enough water to float the logs, but it’s hard to imagine how that much depth of water could have been present. 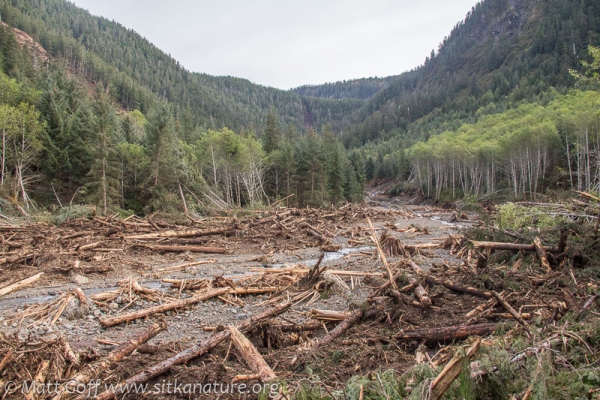 Connor wanted to cross the log jam, but I didn’t think that was a good idea. While the logs seemed jammed together pretty tight, it only takes one lose log to tip or roll, and a person could end up pinned in a very unfortunate situation. We worked our way around the jam to an additional section of intact trail, which we walked up until it was once again blocked by fallen trees. This time there was much more mud mixed in with the trees, and climbing up on a fallen spruce at the outer edge, I was able to see we were just a short distance from a broad set of open gravel cut through by the stream channel. It didn’t take much to figure out that getting across the debris clogged margin required some care. The mud was very soft (we did not want to test how deep, so stayed on logs/wood as much as possible), and a few of the smaller pieces of broken log were a little loose and did not offer as solid of footing as one might prefer.

The view of this washout zone left me with a feeling of devastating beauty. Clearly great violence had torn through this valley, however the now peaceful clear flowing stream running through broad clean gravel bars, albeit with haphazardly placed logs and other woody debris scattered across them, bordered by debris flow remnants of mixed mud and trees that marked the margins of the original debris flow, all lined by apparently untouched alders and young growth conifers standing tall above, resonated with me. 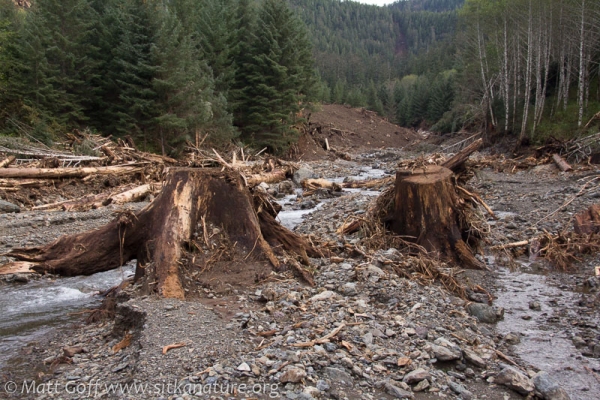 One thing that impressed me was seeing still well anchored stumps that were left from the logging that took place 40 years ago. It made me wonder how this slide might have played out differently if the old forest were still intact. Perhaps it wouldn’t have been much different, as no doubt part of what made these stumps less prone to being pulled out was their relatively low profile. I am also guessing the stumps were probably mostly (or perhaps entirely) buried, as otherwise I would have expected them to be much more rotten than they appeared.

The easiest off-trail walking of the day was up the washout zone. It was almost entirely free of mud (which had probably been carried down river during a higher flow – Starrigavan river had been quite muddy last weekend). It didn’t take long for the impressively large slide area to come into view. We were careful to avoid any of the still muddy slopes, as we were finding any mud that we accidentally stepped on was still quite soft. As it was a dry day, I was not too worried about further movement, but it seemed prudent not to test matters (and I think I would have kept an even further distance if it were raining).

I am not sure quite how far up the top of the slide was, but I’m guessing it’s pushing towards 1000 feet in elevation. It’s not entirely clear (to me) that the slide started at the top, as it’s easy to imagine a scenario where it cuts loose below, but that creates less support for what’s above, and so takes some additional land down as well. It was also interesting to see a small patch of 10 or so trees still standing right in the middle of the upper slide zone.

One of the things that also stood out to me was the exposed layers of what I presume to be glacial till covered by multiple layers of volcanic ash, and finally the organic material on top. It’s not often that I see such a clean exposure of all the layers (this one probably won’t last long), and I find myself curious to find out what details these layers could give about the general story of glaciers and volcanoes. 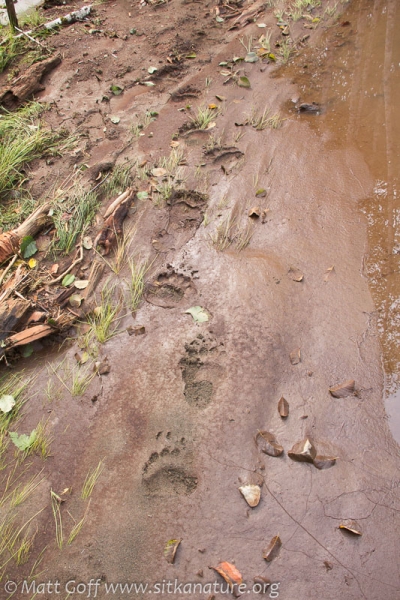 We went back the way we had come to get out of the washout zone, then followed a different trail back for a time. Along parts this trail it appeared some slower moving water must have carried in and deposited sediments which made for some nice fresh mud. There were some interesting tracks along the edges the mud/puddles, including the bear tracks shown above. It turned out this trail was one that connected the different forks, but I did not know that at the time, and as we were getting short on time and the trail was going in the wrong direction, I opted to have us cut through the forest back towards the main trail we had come up on. Along the way we found many more bear tracks (interesting to think about them hanging out in here with the atv folks regularly zooming by not too far away) and remains of an old foot trail.

Overall the slide was very impressive. I’m not sure how safe it is to wander around up there to look at it, but at the time I didn’t feel like I was taking much risk. (Though in hindsight, looking at some of the pictures – especially of the log jam, I wondered.) I wouldn’t be surprised if there is more downward movement of mud and other debris as the fall moves on, and I would probably prefer not to be there for that (or if I was, I would want to be across the way where I could watch from a safe distance).

Additional photos from the trip

If you have any thoughts or questions about this, I would be interested to hear them – Please leave a comment!

I’ll end with some of my own questions: