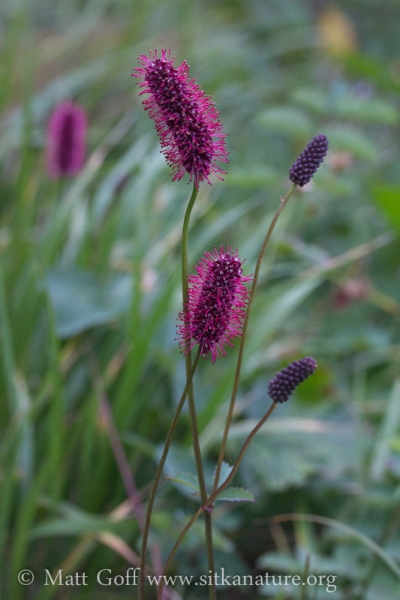 Menzies’ Burnet (Sanguisorba menziesii) is the least common of the burnets found around Sitka. It’s my understanding that it came about as a hybridization of the two more common species Canadian burnet (S. canadensis) and common burnet (S. officinalis). It certainly appears that way, with the shaggy look of the inflorescence like the former an the dark maroon color of the latter. Presuming it is of hybrid origin, I wonder how often such events occur, or whether most of them are descended from some original hybrid in the past.

Off the top of my head, I can only recall finding this species up along Harbor Mountain trail, and in some of the lower muskegs of Indian River valley (common burnet was much more common in most of the muskegs). It’s a listed taxon in British Columbia, where there are apparently few collections, but there seem to be more in Southeast Alaska with additional ones further north. Looking for records in the Arctos database is a little difficult since it appears that S. menziesii has been synonymized with S. officinalis based on the 2011 Catalogue of Life checklist. The 2014 CoL checklist has S. menziesii as a good species, however. The the range there is given as Alaska, British Columbia, and Washington – so it seems like it could be a Northwest Coast endemic (though I guess it depends on how you consider records from South Central and Western Alaska).