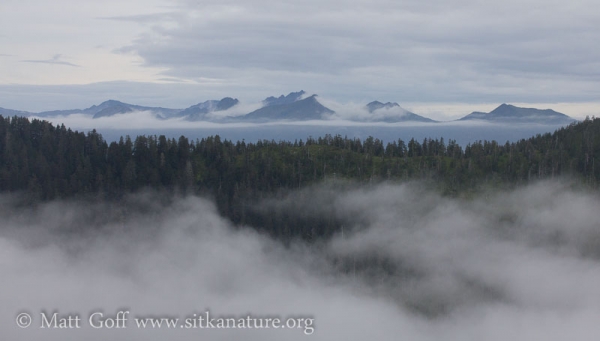 Normally, when my parents’ early August visit is too early for the blueberries to be ripe on Harbor Mountain. However, with this year’s minimal snow pack and early melt, I thought there was a chance some would be ripe, and had suggested that we go up there an look. After I got back from pick-up ultimate and had a chance to shower and get ready, my parents and I headed out the road (my mom was planning to just stay in the car reading a book or napping).

I needed to change out ibuttons, so while I was doing that my dad looked around at the berry bushes along that section of road. He was finding quite a few ripe berries, but not much in the way of heavy production. Still, compared to Idaho huckleberry picking it was pretty easy and fast. I suggested we hike for a bit to go to a place I’ve seen lots of berries before – though it would require ‘about 45 minutes’ to get there. My dad was hesitant, since he didn’t really want to walk that far only to find that the berries weren’t any better there, but in the end we went for it.

My dad lead the way on what turned out to be a clothes drenching, lung-busting, thigh killing march. I’m not sure why he felt the need to go so fast, but I was thinking the shower had been a waste of time by the end. I’m going to say that it was tiring to keep up with him because we were up close to the elevations he lives at (and nearly two thousand feet higher than I’m used to) and I had already gotten tired from playing ultimate earlier. I’ll just ignore the fact that he’s over 70 and I’m under 40 (or perhaps I should just applaud and congratulate him for being in such good shape at 71 – but that’s kind of hard with my hands on my knees sucking wind).

One high/low light of the way up was getting stung by a yellow jacket. At least I think that’s what it was, I was just walking a few feet behind my dad when I felt a stinging on my lower shin. My initial response was to kind of scratch at it with my foot while looking down, and I didn’t really get a good look. It took a moment to realize I had been stung – as far as I know, only my second time (the first was when a bee got caught between the upper part of my hiking boots and my sock). The sting didn’t swell up or anything, but there was a circle of pain a couple of inches across for the next half hour or so.

After about 35 minutes we made it to the area I had previously seen some heavily loaded blueberry bushes. There was nothing quite like that this year, but the blueberries were more abundant than in the place where my dad had first been looking. He ultimately wished he had brought his berry picker, since many of the bushes were a bit sparse for efficient hand picking, but would have raked up quickly with the picker. For my part, I focused on the dwarf blueberries (Vaccinium caespitosum). Unlike the early blueberries (V. ovalifolium) only about half of them were ripe, but it seems like a good crop this year, so there were still plenty of ripe ones. In the end we (my dad) got maybe a gallon or so of early blueberries and we ended up with probably 3/4 gallon of dwarf blueberries.

As it was getting on toward 8:30, we were trying to pick what we could of the ripe dwarf blueberries in ‘one last patch’ when I heard my dad say “Oh man!” I looked up to see him standing looking away from me and then I heard kind of a snort (like a horse might make), looked toward the sound just uphill to the right of him and saw a bear trotting up and away from us. Just before the bear moved over a high spot and around a corner, my dad said “Oh, there’s a bear!” I had initially assumed that he was speaking about the bear, but it turned out he had seen another bunch of dwarf blueberries that we weren’t going to have time to pick. My guess is he had done this just as the bear was walking down towards us (not realizing we were there), then was disappointed to have his/her solitude broken by the likes of my dad and I. My dad heard the snort, thought I was making it, looked back and me and then up to where I was looking, and that’s when he realized the bear was there. It probably had gotten within 30 feet or less of him. Fortunately, it (presumably) hadn’t made it to the bucket of already picked blueberries that was sitting up near where the bear was walking. It would have been a bummer to have the bear eat them, though I guess it would have made a good story. The other amusing thing to me about all of this, is my dad had just told me a couple of days before that he had never seen a bear while he was out hunting, berry picking, or fishing (the streams) in all the years he had done those things here.

We did make it back to the car as it was getting dusky. I lead the way back and took a slightly less brisk pace, but it also helped that much of it was going with gravity instead of against it.

Other notes: It was interesting to be between the clouds, they moved up and down from below a bit, though mostly we were out of them. It remained overcast above. Also, there were many moths flying around – I was wishing I had brought my net. Perhaps another time. 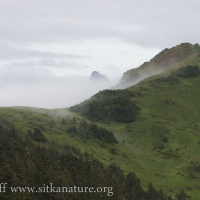 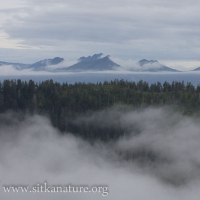 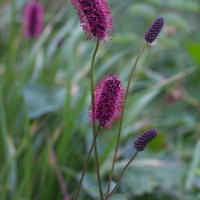 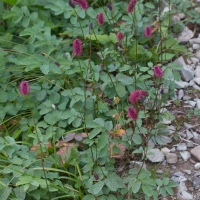 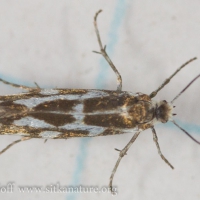 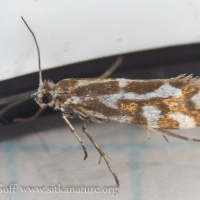 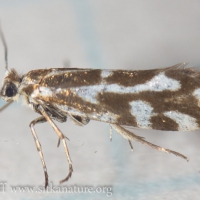 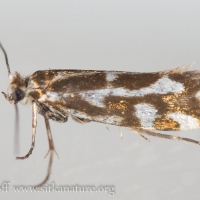 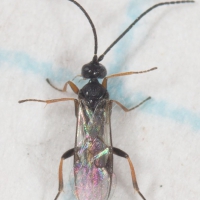 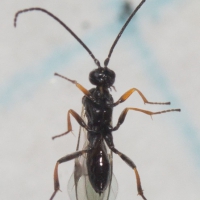