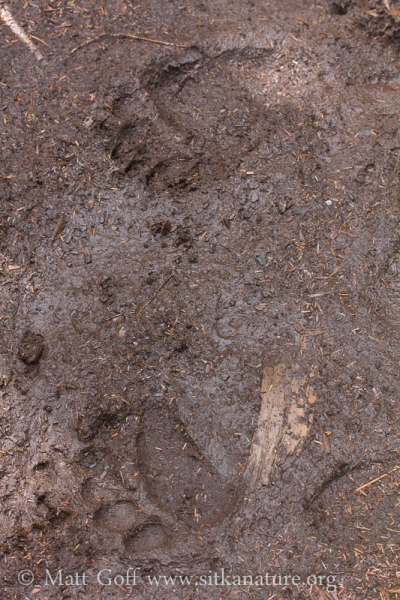 While waiting for others to show up for a hike at Indian River trailhead, I saw someone start up the trail. She came back just a few minutes later and said hello to me – I had not recognized her at first, but she reminded me she had been working with Cascade and Matt on their project at John Brown’s Beach. She said she had planned to go for a longer hike, but guys working up on the water treatment facility had just seen two bears walk by a few minutes before.

I was part of a larger group (13 of us all together) and not particularly concerned about bears, but it was fun to see very clear fresh looking foot prints about 5 minutes up the trail. Fish are starting to move up the river (in fact it was just before this that we stopped to watch an eagle eating a fish – which I’ll post about in the next day or two), so hopefully the bears that have been getting into things in several neighborhoods around town will find their fill of fish and reduce the chances of a negative encounter with people.