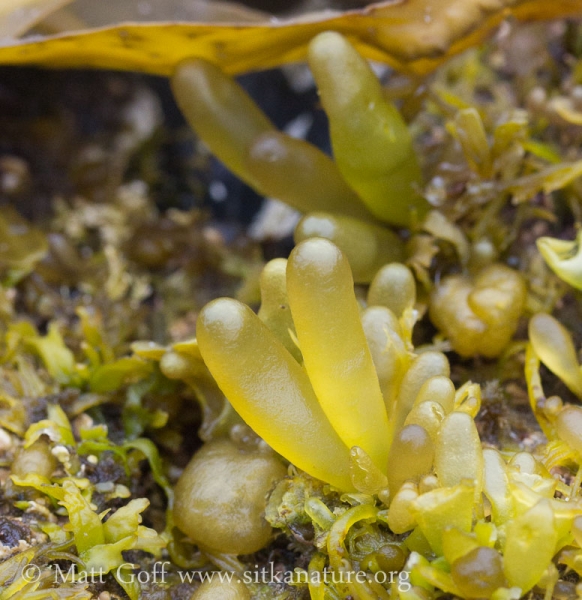 When I was young, there were many occasions I spent playing down on the beach between Totem Park and the Sitka Sound Science Center. Although I saw many things, there are not too many that I remember noticing and/or being aware of during my childhood. Although I wouldn’t have been able to tell you any official name for it, the sea sac (Halosaccion glandiforme) is one of those organisms I certainly had knowledge of. In some respects, it’s just another seaweed – one of many different species that grow densely in the intertidal habitats here. While not hard to find on rocky beaches, neither is it abundant and hard to avoid noticing. However, it does have a characteristic that seems especially compelling to many kids (and certainly was to me). When found during a low tide, it is usually inflated and partially or completely filled with water (as in the photo above). Each sac also has very small holes (mostly toward the upper end) that you can’t really see. When squeezed gently, the water will spray out of these tiny holes (mostly in the direction it was pointed, but sometimes there were rogues that squirted the squeezer). No doubt it’s not hard to imagine what kids tend to do with these. Perhaps this speaks a bit to the power of child passions for building connections and memories that last.

I am curious if anyone else out there remembers these from childhood for similar reasons. Are there other things that might be obscure in many respects, but caught your eye as a child that you still remember? What drew you to them?