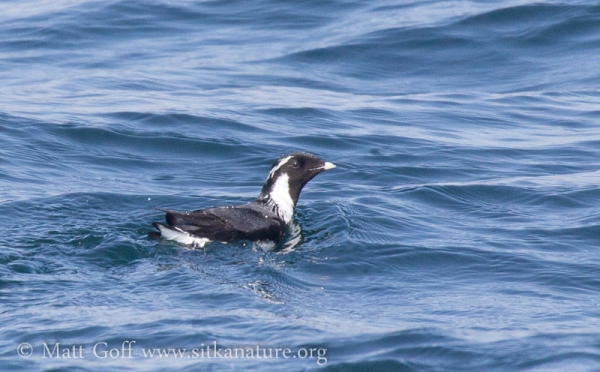 Ancient Murrelets are considered fairly common in Southeast Alaska, except in winter, when they are considered uncommon. However, it seems they are not actually very common through much of the region, as no local checklist currently lists them as more abundant than uncommon (Glacier Bay), and all the checklists from inside waters have their occurrence somewhere between absent and rare. This May and first part of June seems to have been a particularly good year for them, as there were dozens, and perhaps over 100 birds in total that I saw on a couple of different trips.

The main place I have seen them myself or heard of them being observed is in the vicinity of Shoals Point, and especially on the St. Lazaria side of Low Island. Most reports that I’m aware of are from late spring and early summer. They do apparently nest on St. Lazaria. A 2013 report of the field season there listed them as uncommon breeders, though noted they are rarely seen on the water near the island. Ancient Murrelets have an unusual strategy (for seabirds) for their young; apparently never feeding them in the nest. Instead, under cover of darkness, after hatching a chick will follow the sound of its parents calling and make its way to the water. The impression I had from the St. Lazaria report is this typically happens sometime around mid-June.

It’s not clear to me where the Ancient Murrelets go after the chicks emerge – perhaps some of them stay in the vicinity of Shoals Point, or maybe they move off shore. Outside the late spring and summer season, there seem to be fewer reports. In particular, as far as I know right now, there is only one winter report (from a Christmas bird count in the 1970s) for the Sitka area. As is so often the case for seabirds, this could be due to absence of reporting observers much more than absence of birds.

Update (16 June): On a trip out to St. Lazaria there were few, if any Ancient Murrelets in the vicinity of Low Island/Shoals point where I had seen them in late May and early June. Perhaps their chicks have now hatched, and they’ve moved elsewhere?