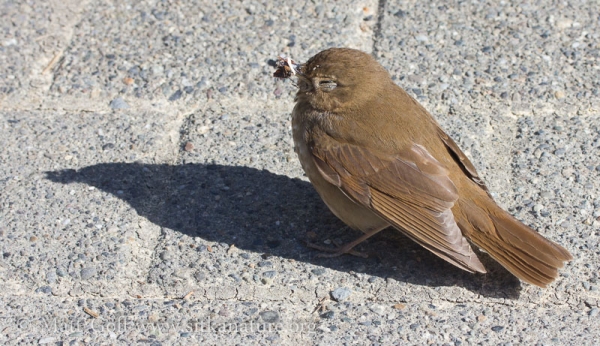 While on a walk at the park recently, I saw a brown thrush sitting still near a rock wall at the edge of the curvy trail between the lower and upper parking lots. It seemed disinclined to move, even as someone walked within a couple of feet of it. At first glance, it appeared to have food in its mouth, and I wondered if it was a Hermit Thrush already feeding young, but a more careful look led me to think it was actually a Swainson’s Thrush, and it was way too early for carrying food.

One of its eyes stayed mostly closed, while the other one seemed alert, and I wondered if perhaps it had hit a window or something (though there was not a window especially close to where I found it). The stuff that I had first thought was food actually appeared to be the brown papery stuff that covers spruces tips before they emerge.

I approached the bird and it hopped away from me, though not very vigorously. I followed it a bit to see if I might be able to pick it up – as clearly something was going on with it. It had enough energy to keep getting away, and I didn’t want to disturb it too much, so I herded it into some thicker vegetation, thinking that it could rest there without as much chance of being caught by something that might want to eat it.

I heard later in the day that the Raptor Center had picked up a Swainson’s Thrush from the park that was quite skinny, and I suspect it was the same one. This is only one of a couple reports of Swainson’s Thrushes I’ve heard of so far this spring, which seems a bit slow/late. They are usually singing around the end of the 4th week of May (and arriving a day or two before, at least), but not so much this year.