On a recent walk up Harbor Mountain, I was reminded (by doing it) that I sometimes mistake Geranium (Geranium erianthum) leaves for monkshood (Aconitum delphiniifolium). Strangely, I don’t recall ever making the mistake in the other direction, which is probably just as well, since geranium is said to be edible (though not the best green) while monkshood is deadly poisonous.

Neither plant is especially unusual in the area, but neither do they grow in locations that I frequent, so I tend to see one or the other of them only a few times a year. Both have leaves that are fairly divided and in a general way somewhat similar in shape. Also, the flowers make it very easy to tell these plants apart, and that’s when I’ve mostly noticed them. These facts (and clearly a lack of careful attention to the leaves) have resulted in me being uncertain about the plants when they are not blooming. 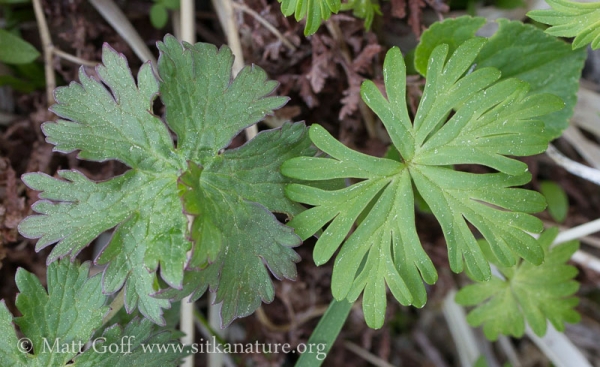 Hopefully this will no longer be an issue, as on that recent walk, I noticed a place where the two plants were growing side by side and took the picture shown above. The greanium leaf is on the left and the monkshood on the right. Comparing them this way, it’s not hard to see the differences.

Questions that come to mind: