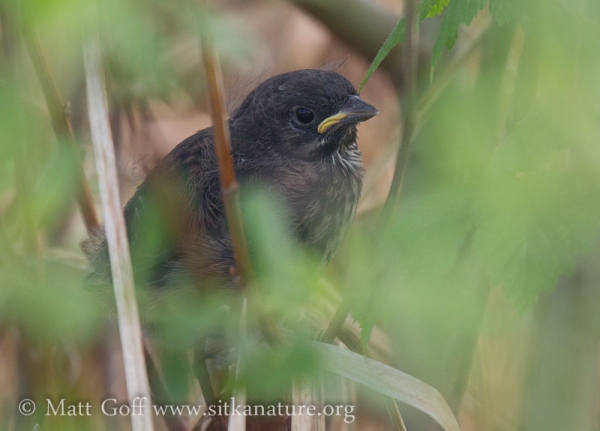 Yesterday I thought the young Song Sparrow I saw standing on a branch outside the nest wasn’t really developed enough to be a fledgling, but Connor said when he visited the lake today, there were no birds in the nest. It’s possible that a predator came along and grabbed the young one, but I now suspect it really was ready to leave the nest permanently. I wonder if perhaps as a species with ground tendencies, it may not really need to be able to fly at first. Perhaps it will just keep to the cover and forage (or get fed by its parents) along the ground while it undergoes the last few days of development necessary for flight. Or maybe it was ready for flight yesterday?

This morning was a low tide, and I thought about heading down to check for moths and maybe take a quick look around the beach before I had a phone call, but when I considered how many containers I had for collections that were already full of things that needed to be taken care of, I decided to work on that instead. I feel like if I’m going to keep some of the things I capture for longer than it takes to get a photo and release them, then I should try to respect the life by documenting them carefully so they can continue to effectively contribute to our collective understanding of the natural world. It’s not hard to do this – in the case of moths, I just write down the collection information on the outside of a glassine envelope and put the moth inside. It does take time, however – and I’ve not always been good about keeping up with it.

Unlike me, Rowan and Connor chose to head down to the beach for the low tide. Connor’s intent was to fish, but the tide was such that it wasn’t easy for him to get his lure out to the fish, so he came home. Rowan reported that she saw some shorebirds that she couldn’t identify as well as a Caspian Tern flying by. She reported catching the usual (for Sage Beach) assortment of flatfish, shrimp, and other intertidal critters.

Between class and my second call today, I spent out in the yard working on getting the rest of the aronia berry plants in the ground. They were young plants shipped bare root, so couldn’t really wait around. I had planted half yesterday, and thought they would be moist enough in a bucket with seaweed until I got the rest taken care. This morning’s overcast didn’t cause me much concern, but by later this morning the clouds were breaking up. This afternoon when I was working, it was clear and feeling downright warm. I’m not sure what the high for the day ended up being, but I suspect it was near 60.

While out working, I noticed the swallows flying by repeatedly. I also heard a song which at first I sort of half-mindedly thought was a Tree Swallow. It kept tugging at my attention as I heard it, so I started looking over in the direction of it and not seeing swallows. Finally I said something about it, and Rowan said she was hearing it also. It didn’t sound far away, so I decided to walk over and take a look. Of course it seemed to have stopped, so I headed back home. Fortunately, I heard it calling again in the other direction from the house and was able to track it down and get a brief (but good) view of it. A male Yellow-rumped Warbler (based on what I could see, I think it was a Myrtle’s, but it could have been a mixture – I don’t see these often enough to recognize them quickly and/or without getting a photo to review). I tried to get a recording of the song, but traffic wasn’t too cooperative when I got closer to it, and then it either stopped singing or flew off farther than I could hear.

1 thought on “Chasing a Song”