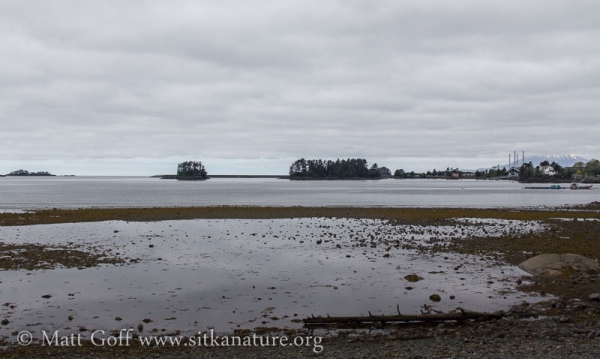 The past couple of days have been much cooler with a marine stratus layer in the morning burning off by afternoon.

For me it was a fairly quiet day nature-wise. I needed to pick up tests to grade as the semester at UAS is over now. I took a look at Swan Lake and saw 30 Greater White-fronted Geese grazing on the peninsula in addition to a couple of wigeons. Ten or more Tree Swallows were swooping around. A little later in the day I noticed a Gadwall swimming across the lake as well. I heard no Red-winged Blackbirds, so perhaps the two that were reported last week have now moved on. There was also a belated report of a Hudsonian Godwit at Totem Park Sunday (not mentioned then, as it was originally thought to be a Marbled Godwit). Prior to the past few handful of years Hudsonian Godwits were only reported a few times. I think in the few years, they’ve been nearly annual, though in several of those years the report was from a single brief encounter.

Regionally, the exciting news has to be a Long-billed Curlew. It was first reported (with photographs) a couple of days ago in Juneau, seen again last night, and maybe again today (that was less clear to me). It’s the first documented sighting in the state and (assuming it passes muster with the checklist committee) will be added to the state list as a substantiated species. There are two other previous sight reports, however.