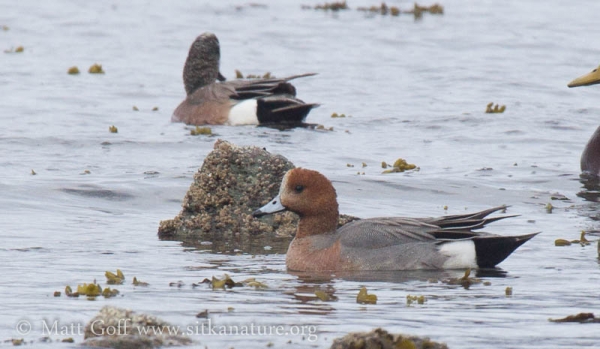 This morning I took a brief trip down to Totem Park to check on the duck and shorebird situation. It was mid-tide (headed out), but quiet for shorebirds. I did see a lone Dunlin and 15 Black Oystercatchers were out there as well. Around the time I was leaving, I saw a flock of several hundred mostly Surfbird and/or Black Turnstones flying towards the beach, but they were too far away to be sure what the proportions were (and if there was anything else mixed in).

Duck-wise, there were 4 Northern Shovelers (first of spring, though I did see one this winter), and the continuing Eurasian Wigeon, now present for day three. In addition a few Mallards, pintails, teal, and (American) wigeons.

This afternoon we took a drive-by of Starrigavan on a trip to the grocery store. There were a lot of birds out there, no doubt attracted by the herring spawn that occurred a little over a week ago. Of particular note were 9 Greater Yellowlegs on the estuary side, and 10 Bonaparte’s Gulls along the shore on the bay side (the tide was out). There were also lots of gulls and other ducks that I didn’t really have time to sort through very carefully.

Connor reported seeing a Hermit Thrush in the park near the river. It’s pretty early for migrants to be showing up, but he seemed confident.