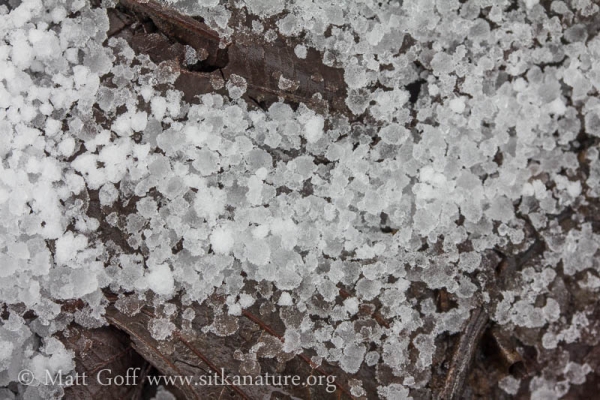 We’re nearing the end of the graupel season, as the weather warms up and moves into late spring and early summer, it seems like it’s less and less likely to see graupel fall. I associated it with convective sorts of showers, and this time of year it may be followed by rain or breaks of sun between squalls. In the late fall and winter I have an association going back to my childhood of graupel falling heavily, coating the ground and then being followed by regular snow. Though now I wonder how reliable that association is, and what might drive it.

Graupel is sometimes mistaken for hail, but it forms in a different way. It apparently starts as a snow crystal, but super cooled tiny water droplets form a rime coating around it, obscuring the original snow flake. It’s got a different look to it as well, much less dense and almost fuzzy.

Over the years graupel has been one of the most popular search terms that brings people to this site. (I think comes after various combinations relating to eagles and talons.) I’m not sure why it’s the case, but it does amuse me.