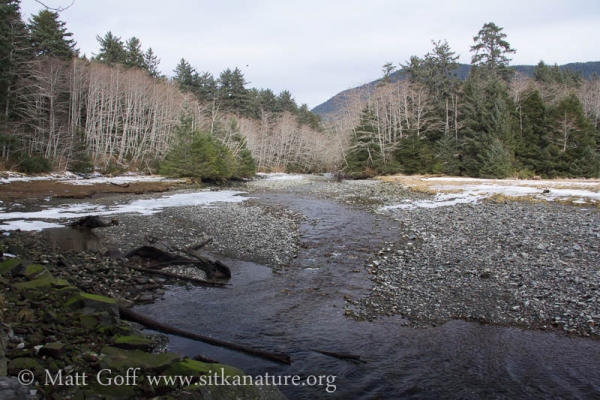 Last Friday, Indian River was as low as I ever remember seeing it. At the estuary, it looked about like I could jump over it in one jump. Before I got down far enough to see that, I first checked out the view from the Sawmill Creek Road bridge. I was a little surprised at how much more ice there was compared to when I had last been by there on Monday. It did not seem like this week had been appreciably colder than the previous one, though looking back at the records, it seems that at the airport lows this week were a bit colder than previously. On Monday there was little or no ice in sections of flowing water, though snow and ice covered the exposed gravel of banks and bars. By Friday, all but the fastest moving water seemed to have a layer of ice. The occurrence (or not) of ice on Indian River is no new mystery for me, but it’s one I have yet to solve. Maybe during future cold snaps I can put out some ibuttons for both air and water and check the temperatures of the river and air. 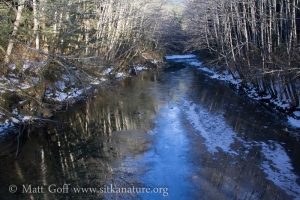 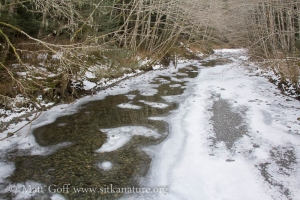 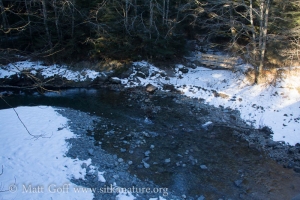 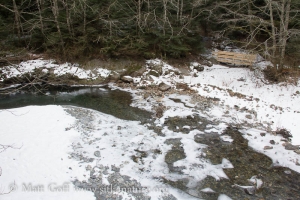 Having said all that, I’ve seen other times when the river was even more frozen than it was on Friday, but at least as far as I remember, there was still more water flowing under the ice than I saw on Friday. Later in the day I was talking to my dad and he said one winter shortly after my parents moved up here (so probably the winter of 1973-74 or 1974-75), there was essentially no surface water in the river where it flowed out. He said he was able to find some water by kicking down into the gravel, but everything on the surface was frozen. That reminded me of something else I had heard a while back from a fellow faculty member at Sheldon Jackson. He said that sometime back in the 70s Indian River froze to the gravel, and it was very hard on the fish population. My guess is that he and my dad were talking about the same event. At this point I’ve not had a chance to check weather records from those years, but I’ll be curious to see if I can find a likely stretch of weather.

As a postscript to all of this, Friday afternoon the rain started and by Sunday afternoon when the picture below was taken, almost 2 inches of rain had fallen at the airport over the previous 48 hours. That much rain combined with melting ice and snow raised the river level back up to what I might consider the high end of normal flow. 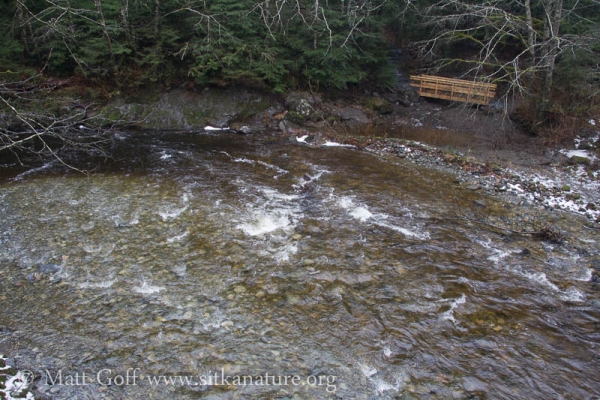