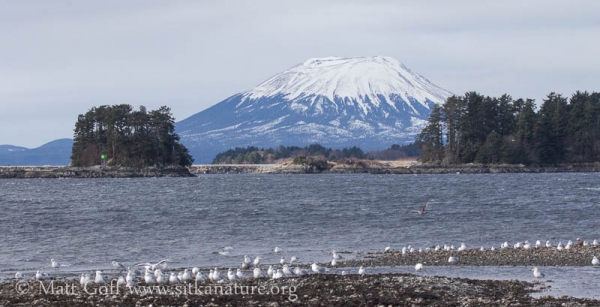 The gulls are on the move. While it’s possible that they are just moving locally, starting to gather in greater numbers along the shores road system where I can more easily observe them, I kind of suspect some of them are also coming from further south. Long-line season starts this weekend, so by next week I expect there will be many more gulls to search through in the Channel and on the tide flats at Totem Park.

I was interested to find this immature gull at Swan Lake yesterday. I’ve seen a few gulls with starfish in their mouths, but this is the first time I’ve seen one at Swan Lake. I’ve wondered if they eventually choke these down or if they just give up at some point and cough them back out. From the looks of it, it does not seem like much progress is being made, though maybe when the starfish dies it softens up a big and the gull can swallow it. I don’t really know, and would be interested to see/hear additional information about the question.