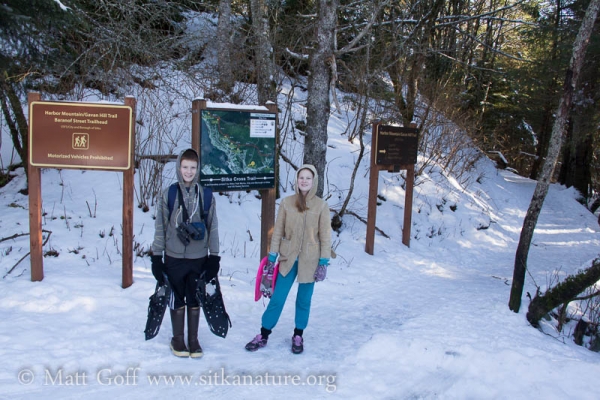 It was a nice sunny day, and Connor, Rowan, and I headed up Gavan Hill with the goal of getting to the ridge line. Although there was snow on the trail, it was not particularly icy nor deep, so it did not cause us too much of an issue. It was a bit of a struggle to get Rowan convinced to keep going at times, especially between the Upper Cross Trail junction and the Lookout. This section of trail always seems to take/be longer than it really is, and is a significant part of the reason I do not often hike up Gavan Hill. I’m not quite sure what the reason for this is, but I suspect it has something to do with how many places it seems like the lookout is just around the next corner, but it turns out not to be. It can end up being a little draining psychologically when you’re not feeling too good physical due to the effort of propelling yourself uphill.

From the lookout to the ridge line seemed to go a little better, though snow was getting deeper. Up on the ridge line Connor was eager to walk further on the snowshoes he had carried up (Rowan had a pair as well), but Rowan and I were ready to call that far enough for the day. I felt more tired than seemed warranted given the effort, and suspect I was still not at full respiratory capacity due to recent illness.

On the way down, Rowan was still fairly unhappy about the whole experience, repeatedly getting annoyed when she stepped or slipped off the side of the trail and got snow on her socks and/or in her shoes. However, shortly before we reached the viewpoint, one of Rowan’s feet slipped and as she tried to catch herself, her other foot missed on other side of the board/step and she pitched forward, nearly face planting in the snow. I helped her up, and she stood there with her head down for a minute. I wasn’t sure what was going on, but it didn’t take long and she suddenly seemed to be in a much better mood, and was excited to get going. It turned out that the fall made her stop caring about how much snow she got on herself, so she just let go of it and started enjoying the fun of moving down the trail.

She and I ended up running much of the way from the viewpoint to the Upper Cross Trail junction stump were we stopped to wait for Connor. I took a little video of her talking about her change in perspective, but the sound is unfortunately dominated by my heavy breathing (trying to catch up on oxygen after running downhill). 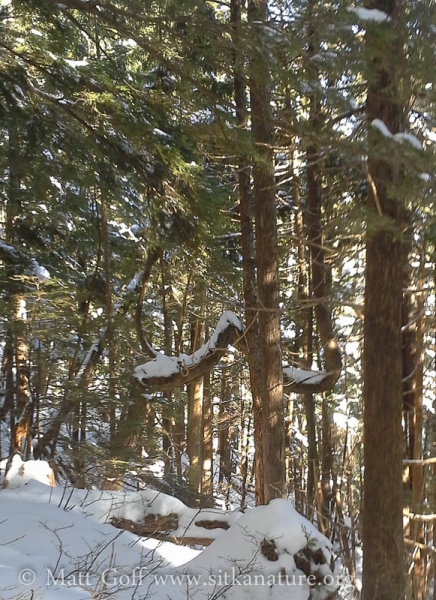 I noticed the odd shaped tree (though I can’t quite remember where) on the way down. There was more snow between the trail and it than I cared to wade through, but I wanted to make note of it and check it out on a future hike.