Early this month, Connor noticed a Robin nest. Over the last couple of weeks while working at my computer, I’ve been watching the adults regularly come and go from the nest as they fed their growing young. Just earlier today, I noticed the young were looking pretty large as they stretched up to get food from a parent. I was thinking they should fledge soon, and thought it would be interesting to watch them making their first steps and flight out of the nest (hoping I was around for it). Unfortunately, I noticed some frantic activity this afternoon and saw a raven at the nest eating the young. It was sad to hear the adults frantically calling as there was really nothing they could do to save their young. It only took a minute or so for the raven to finish off its meal, but the adults continued to call for several more minutes, first in the nest tree, then a short distance away.

A little while later I noticed the male robin with food in its bill moving through the yard. I wondered if maybe somehow one of the young robins had survived. The male was flying to various perches in the yard, but seemed reluctant to visit the nest. As he was perched in a nearby tree, a raven came up and started checking out the tree he was in. I heard the robin making the high frequency downward slurring ‘tseee’ calls that I think are aerial predator alarms (or something similar). These calls continued for the entire time the raven (and later a second one) was in the tree. For its part, the raven seemed to be checking out the branches of the tree fairly thoroughly. My guess is it was hoping to find a nest.

A little while after the the ravens flew off, I saw both the male and female perched in trees, the male carrying food, but not the female. Finally the male flew over to visit the nest. I could see him appear to try to offer food to an apparently empty nest. After a few moments, he flew back out to another perch, still carrying food. As I write this, over an hour after the young were taken, I hear the female robin calling from a nearby alder across the yard, while the male perches nearby still carrying food. I also notice that he is favoring his right foot – it seems to be injured a bit, perhaps in his attempt to defend their nest. 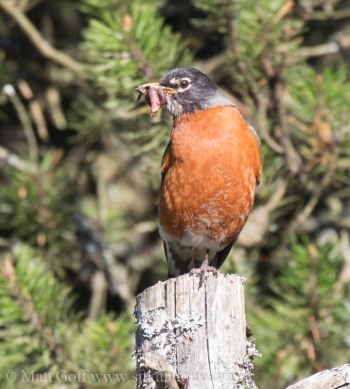