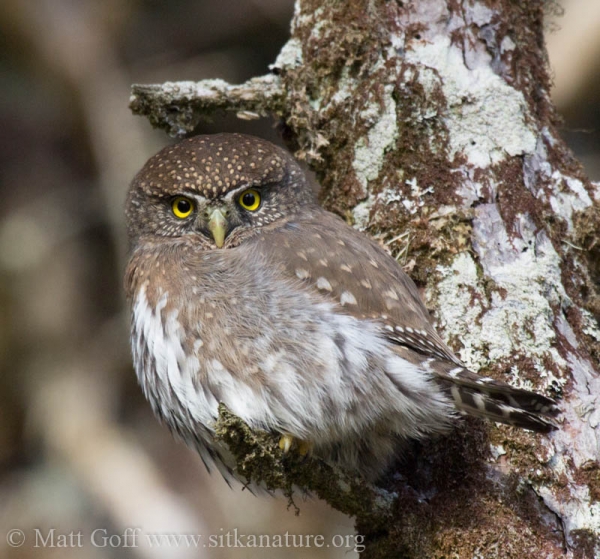 Last Friday I spent much of the day walking between Kamenoi Point and Mountain Point on Kruzof Island. Along the way I happened catch the movement of a bird flying up into a branch at the edge of the forest. Checking it out more closely, I discovered it was a Northern Pygmy-Owl (the first I’ve actually seen – though I have heard one before). Over the 15 minutes or so that Rowan and I were able to watch it, we were able to get very good looks at it. It moved between branches four or five times, While perched, it spent much of its time staring intently at the ground. I thought it was probably looking for prey, perhaps mice, voles, shrews, or small birds. In the time we were watching it, we never saw it go after anything.

In the bushes and smaller trees at the very edge of the forest there was a Pacific Wren and a Song Sparrow that alarmed during part of the time we were there. The wren appeared to be looking up toward where the owl was perched, but the sparrow did not seem to be aware of the owl, and I had more the impression that it was alarming at Rowan and/or I. Another possibility is that both song birds were simply using us as a bit of cover to alarm while feeling like the owl would not come near us, so they were a bit safer.

Northern Pygmy-Owls are considered Rare in Southeast Alaska. They are not reported every year around Sitka, but probably are around the area in small numbers throughout the year.

Additional photos from the trip, including many more of the owl.