This fall and early winter it has seemed like few days on the water very nice, and as a result I’ve been thinking that this year’s weather/sea state has been worse than last year’s which, for some reason, I remember as being reasonably mellow. After commenting on this, I decided to look up the buoy records at Station 46084, the Cape Edgecumbe Buoy. Although called the Cape Edgecumbe Buoy, it’s actually well south of there, quite a few miles off-shore from Whale Bay. After downloading the historical data, I got it into R and did some investigating.

What I found was the data doesn’t stack up quite with my memory. 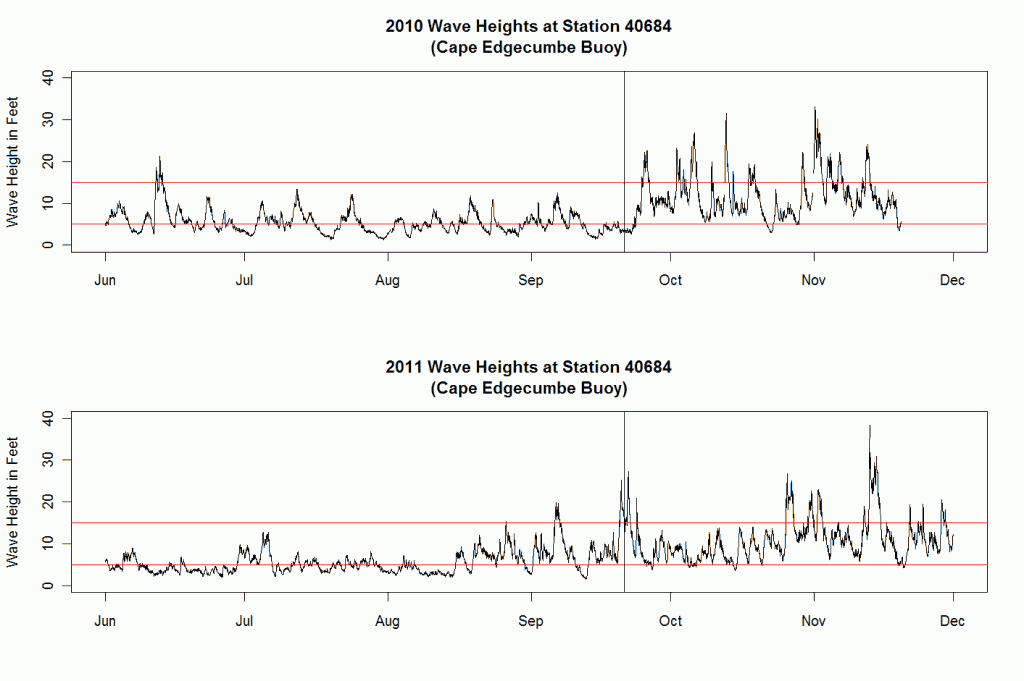 What I remember most clearly from fall 2010 is September being relatively calm. I’m thinking it was fairly calm over a couple of weeks, at least, and that inspired me to arrange for a boat trip out off Cape Edgecumbe (and someday I will get the photojournal entry posted for it) on 21 September. That date is marked by the vertical line. Or course that day the wind kicked up and there was 4 ft chop. It was not terrible out there, but it also wasn’t nearly the calm conditions as on other days. Of course this September we were buffeted by at least a couple of significant storms, including a pretty good one the beginning of September and an even bigger one (with 60mph winds) the third week. In addition, things had started to pick up even before that in August.

Compared to 2010, the end of September and most of October was relatively mild at the buoy in 2011. While not exactly calm – seas never really dropped below 5 feet – neither was it too brutal, as it was late October before the wave height got over 15 feet. November of both years seems qualitatively similar, at least for the data that is available. The buoy stopped recording data in November 2010 and was not repaired until spring 2011. As of this posting, the December 2011 has not yet been posted on the site.

As far as the summers go, it looks like 2011 had more consistent conditions from June to mid-August than 2010. It’s a little hard to tell strictly from the wave height data what things might have been like out on the water – a 5 foot high frequency/steep chop is going to feel a bit different than a 5 foot swell with it’s low frequency movements. The current reporting gives an indication of the steepness of the waves, but that’s not included directly in the historical data. I suspect it can be derived from the spectrum data, but I’ve not tried to figure out how to work with that.

In any case, I have concluded that my mistaken impressions of the differences between 2010 and 2011 are probably due primarily to a couple of different factors. First, the storms started nearly a month earlier in 2011, and the early storms this year were more dramatic in town than many fall/winter storms due to a different wind direction. Second, my impression of Fall 2010 is probably more correctly an impression of Winter 2010-2011. During this period I was able to get out on a boat trip at least once a month, with conditions being pretty reasonable each time. Since we’re just heading into that time period for this year, it may yet turn out to be similar this year. Unfortunately since the buoy was not functioning correctly last winter I won’t be able to check on my impressions.