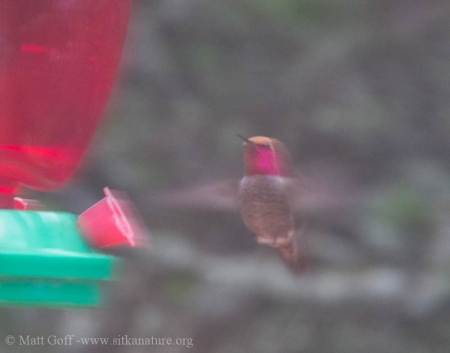 It was another wet day, though less breezy than yesterday.

This afternoon just after 3, I noticed the juncos gathering in the branches of the trees east of the house. Several times this winter I have noticed juncos moving through those trees around this time (relative to sunset, rather than hour of the day). Each time they have come from the neighborhood to the south and east, moved through the trees in the yard, and from their continuing northeast across the road toward the Geodetic Way. A couple of times in the morning I have seen them reversing that route, but I’m less often paying attention out the windows at that time.

When I first noticed them today, I decided to go outside and watch. They seemed to stay in the trees longer than I remember noticing before. I’m not sure if the flock was more spread out, and the early arrivals were waiting for the rest to catch up. It’s also possible this was fairly typical, and I’ve just not noticed before.

While I was out there, an Anna’s Hummingbird flew up and then backed off when it realized I was there. It was a different individual than showed up a couple of days ago. The other one appeared to be an immature male, while this one seemed to be an adult. I came inside to give it space and grab my camera when I saw it. There wasn’t really much light remaining so conditions weren’t ideal, but I took a couple of pictures as it was feeding anyway. 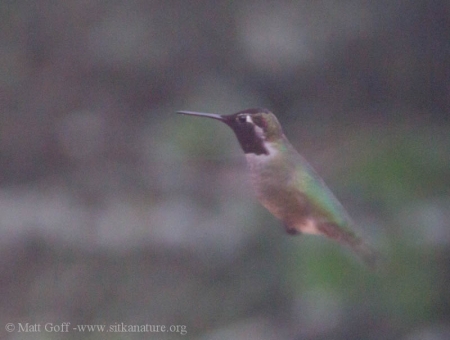