This week we got to witness some excitement in the park involving Bald Eagles and Common Murres.
Monday 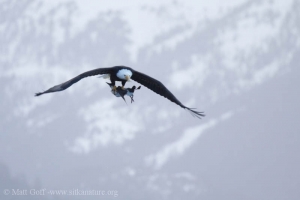 I was out on the tideflats looking for a Rock Sandpiper (which I didn’t find) when many of the birds between me and the water flushed away from the water. I looked up and saw an eagle flying toward land and realized it was carrying something. I was able to snap some pictures of it as it flew past me, then banked over toward the forest. I had gotten a good enough look that I was pretty sure the eagle had a Common Murre in its grasp. 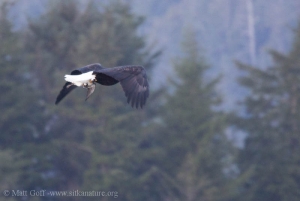 Connor decided to see whether he could see where it landed and maybe find some feathers, so he ran off for the forest. I watched and saw as it briefly looped back out of the trees while being chased by another eagle or two. Connor was not able to determine where the eagle ultimately ended up, but he thought it was on the other side of the river. Later I found out from Rowan that she had noticed the eagles flying through the forest (she had chosen to wander through the woods instead of on the beach), but also was not sure where the eagle had landed to eat its meal. 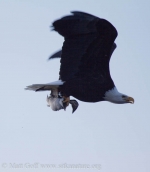 Tuesday
We went back to the park, and both kids decided to wander through the woods. The tide was up, and the weather wasn’t so pleasant, so I made quick work of my beach watching and walked along up the river side of the beach-side loop. While near the bridge, I saw an eagle flying through the forest, again looking like it had a murre in its talons. The forest is thick enough that I did not even bother trying to figure out where it went, but continued on out to the main entrance. Despite waiting a while along the trail, I had not seen Connor and Rowan come out, so I decided to wait a bit longer near the visitor’s center. 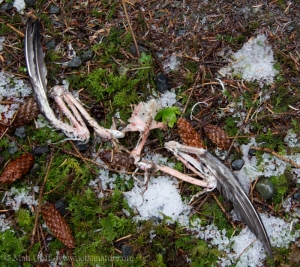 While standing there, I noticed some small white feathers drifting down with the breeze. It seemed like they were probably pretty fresh. After several minutes of searching, trying to backtrack based on the direction of the wind, I finally saw the eagle sitting in a tree behind the carving shed. 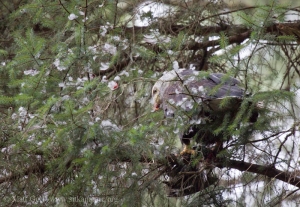 While taking pictures of the bird, Connor came walking up the beach-side of the main loop, and asked me if I had seen the bird body along the trail. I hadn’t, and he told me it wasn’t far up the trail, so he and I walked up to what turned out to be nearly the other end of the park and saw the body that turned out to be a sternum, wing bones, and a couple of feathers on each wing. Although we weren’t positive, it seemed pretty likely this was a murre, perhaps even the one from Monday. 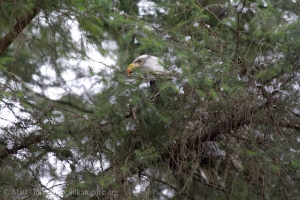 Connor went off around the river side of main loop to see if he could find Rowan along the trail, since neither of us had seen her for a while, and I walked back along the beach-side. When I got back to the eagle, I saw Rowan there watching it. She had also noticed the feathers floating down and didn’t take long to figure out where the eagle was eating its meal. We all watched it for a while, though it seemed to eventually get tired of our prying eyes and flew off to finish its meal in peace somewhere else.

Thoughts
I don’t know how often eagles take murres. I’ve never seen it happen before, though that could be a function of where murres are usually found. On Monday there was a pretty large group of them off Jamestown Bay, and I suspect that’s where the first eagle picked up its bird. It was a little more difficult to tell if they were still out there on Tuesday, but I suspect at least some were. In talking to Marge Ward, she thought some eagles might have started to figure out murres could be a good food source a couple of years back when there were many eagles in town starving to death (dozens were turned in to the raptor center by March – more than usually were turned in over a full year).

There were other odd murre occurrences this week as well. I heard of at least two dead murres found with no apparent injuries, one on the water, and another washed ashore. There is at least one murre that has been seen almost constantly in Crescent Harbor. I saw it yesterday, and it seemed fairly lethargic, though it’s possible that it is more active at other times. I also saw an additional couple of murres at the mouth of Crescent Harbor. I do not think this is very typical. It makes me wonder if there’s an illness afflicting the murres, killing some of them, and making others a little less able to avoid predation.