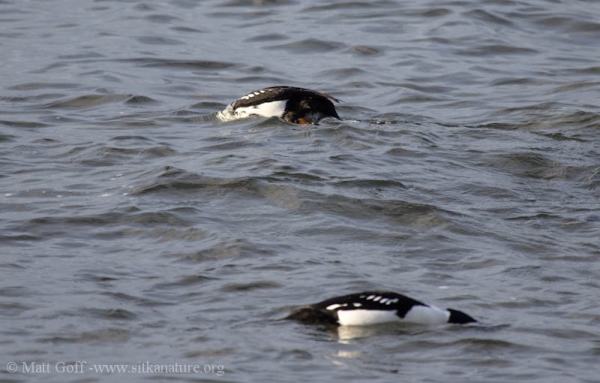 On a recent trip to Totem Park I observed a small flock of Barrow’s Goldeneye, both males and females, within a couple feet of shore. They were swimming along, ducking their head below the water, then diving briefly before popping up again. I got the impression they were seeing things underwater to grab and eat, though the water was only a couple of feet deep at the most, where they were swimming.

The forecast high was for 11+ feet a couple hours later than I was there, so the level at the time was a little over 9ft (estimated using the Rule of 12ths and the fact that previous low was about 3 feet). The flats were almost completely covered, and the shore the goldeneyes were working over was softball-sized cobbles just before the battle site bench area.

This area of shoreline wouldn’t strike me as being particularly plentiful in invertebrates that might be accessible to the ducks. It doesn’t spend much time underwater, and the cobbles probably are not especially hospitable for many creatures. I think my kids have found shore crabs under some of them before (or not too much further down, anyway), so perhaps there were shore crabs crawling around and the goldeneyes were grabbing them. This makes me wonder about it from a crab’s perspective – despite the specter of diving ducks, I suspect the water affords more protection from avian predators than not. When the water is not high, I imagine the ravens, gulls, and crows make quick work of any crab that isn’t well hidden. I have observed a raven eating a crab before, and it’s not unusual to see crab parts in cough pellets. 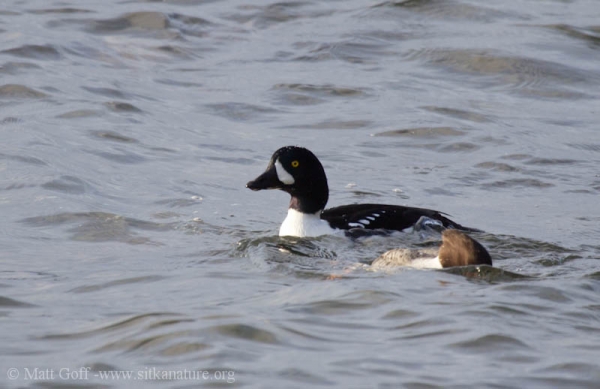