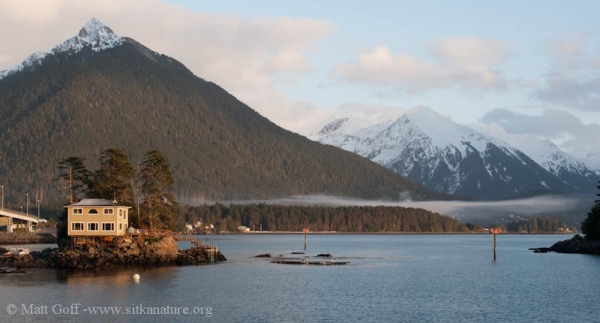 Got over to Alice Island briefly before class this afternoon (yesterday, now) and was interested to see what at first appeared to be a layer of clouds hanging around the base of Verstovia, but I later realized it was probably smoke. Calm conditions and clear skies probably resulted in a temperature inversion (where temperatures do not drop consistently with gains in elevation), and I suspect that’s why the smoke seemed to reach a certainly and spread flat.

While over on Alice Island I spotted a flock of 30 or more Common Redpolls – first I’ve seen in a couple of years. I have been thinking it seemed like a good year for redpolls, as they seem to show up more often when there is significant snow early in the winter.

This evening I had a chance to hang out with Steve Heinl and Andy Piston, who were in town for a fisheries meeting. They’re active long-time birders in Ketchikan, and it was interesting talk about birds in Southeast – including distributions and the various migration routes different species seem to take.