Not much outside time today – pretty much just my walk over to UAS (and a hurried one, at that).

Temperatures have started dropping again, with the forecast for even colder overnight and tomorrow. Outside of the wind, today’s temperatures weren’t bad, but a breeze that seemed to be variable out of the Southeast (mostly) and East made things seem quite a bit colder. It seemed odd for the wind to be out of the Southeast when that’s more associated with low pressure, clouds and rainy. I suspect it was really more of an East wind, but the topography of the island resulted in the wind getting bent around to come out of the Southeast in the downtown area. It was mostly clear, but there were some high level cirrus clouds as well as some lower clouds that formed around some of the mountains.

On my way across the bridge I noticed a Raven carrying a stick flying from near the fuel dock (where I first saw it, anyway) south under the bridge to where it landed in a tree on Turning Island. I took a brief look, but couldn’t make out a nest or anything where I saw it land, but I did not have time for an extended investigation. 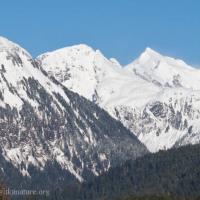 Snow was blowing off the unnamed peak behind the Sisters, but not the Sisters. 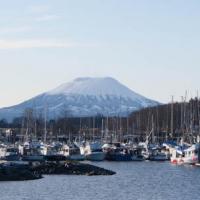 Though skies were mostly clear, some cirrus clouds were positioned to shade Mt. Edgecumbe. 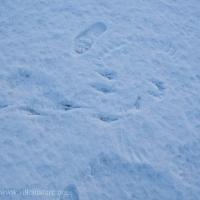 It appears a raven landed and turned nearly 180 degrees to walk off.