Although temperatures had warmed up enough overnight for precipitation to fall as rain first thing this morning, it did not take long for things to cool off again and the snow to return. The forecast had been for rain and snow mixed with no accumulation of snow, but for much of the day a heavy wet snow fell and accumulated at least a couple of inches. A couple of times, the sun broke out between snow flurries, but the bright sunshine and blue sky were short-lived in each case.

I wasn’t paying too much attention to the birds around the house, but did get out to Starrigavan for a brief look other stops at the kelp patch turnout and Sea Mart. More than 20 Common Ravens were feeding along with several Trumpeter Swans beside Nelson Logging Road. I suspect someone had thrown out food that both swans and ravens like. Snow was falling, so it was not very easy to get a good look and I didn’t notice anything other than the expected species. 20 or more Harlequin Ducks and handful of Surf Scoters seemed to be foraging in the kelp patch near that turnout – I also spotted a Common Loon just before it dove under again. Not far offshore at Sea Mart were a handful of Long-tailed Ducks, a Horned Grebe, and some gulls.

Perhaps this is old news, but it seems like Sea Otters are becoming pretty numerous near the road. There were at least 5 in the near shore kelp patch at the turnout, and another 3 or 4 by Sea Mart. It will be interesting to see what, if any, impact they and their voracious appetites will have on the size of the kelp patches in these easily observed locations over the coming years. 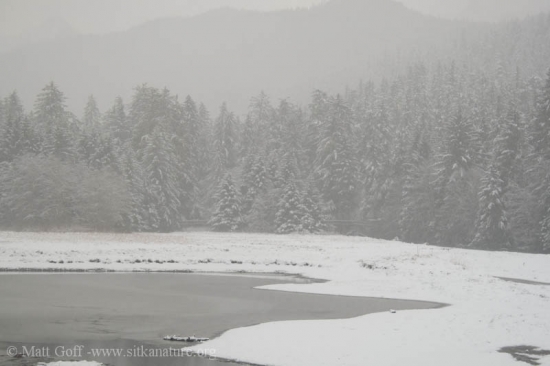