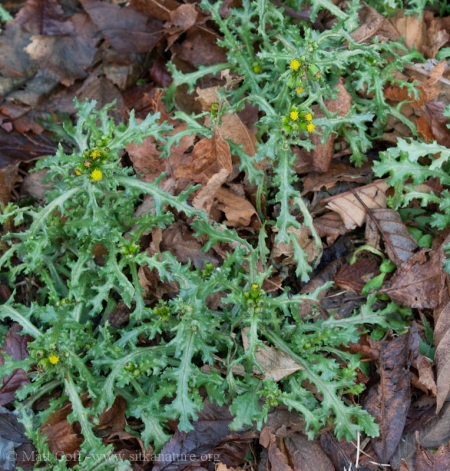 I do not remember seeing Common Groundsel (Senecio vulgaris) around Sitka when I was growing up. There’s a good chance it was here and I didn’t notice it, but I suspect I’m fairly safe in saying that it probably was not as common then as it is now. This species is introduced, and potentially invasive, as it can do a good job of out competing other (native) species. Unlike some other introduced species, I have only seen these in areas of on-going impact by humans – but in those areas this species can be quite common.

Common Groundsel seems to be fairly cold tolerant – the plants shown here looked relatively fresh, despite multiple relatively heavy frost events – and also capable of blooming (and possibly fruiting) much later in the year than other species. It’s been quite some time since I have seen many lingering flowers on other plants around town (and the latest of the others also were non-native), but if it weren’t for all the undecomposed alder leaves on the ground, it might be tempting to imagine these were ramping up their bloom production in the summer.

It’s highly unlikely that the flowers shown here will manage to get pollinated and produce fruit, but last March I found a plant of this species in a similar state. I suspect the flowers persisted through the winter which seems pretty impressive to me. The plant was in a fairly sheltered location, which I’m sure helped. I did not go back and check on the plant to see if it ultimately fruited, and it was quite some time before I saw any other flowers (which reinforced my thinking that this plant had flowers persisting through winter). 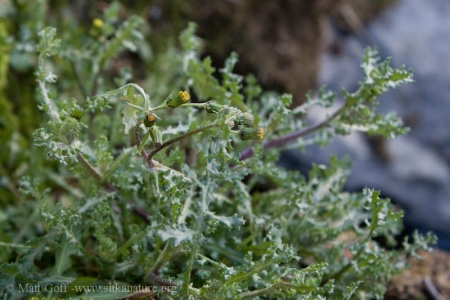