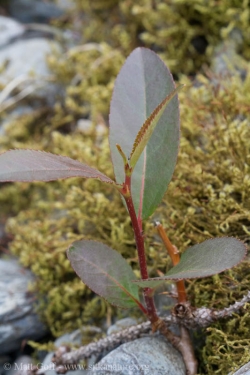 The summer I was working at Blue Lake and first noticed these seedlings, I figured they must be some sort of willow. Willows are somewhat notorious for being hard to identify, even with much more to go on than a seedling, so I did not have much expectation of being able to identify these seedings without figuring out what they turned in to. However, the only mature willows I saw up there seemed to be the typical-for-Sitka-area Sitka Willow (Salix sitchensis), and these seedlings were definitely not that. As the field season drew to a close, I just had to leave the identity of these seedlings as an open question.

The following summer when I was on a trip to Red Bluff Bay helping out with wilderness area surveys that the answer to this mystery presented itself. While hiking back down along the river after exploring some of the lower valley, I noticed a seedling that looked like what I had seen at Blue Lake. I stopped to take a closer look and happened to notice this seedling was growing directly below a good-sized Cottonwood (Populus balsamifera) tree . It finally dawned on me that the seedlings were cottonwoods. 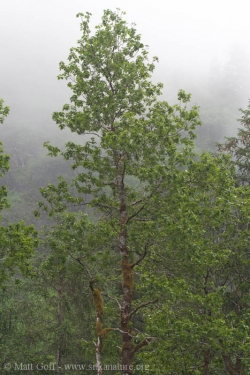 If you never left the road system in Sitka (and trails directly accessible from it), you might think the only cottonwoods around were planted (or grew from seeds of trees that were planted). None of the rivers along the road (including Indian River, Starrigavan Creek, Sawmill Creek, and Medvejie Creek) have cottonwoods growing along them in the riparian habitat they are known for favoring. The majority of the trees occur in the downtown area and/or in yards (one notable exception being a single tree that seems out of place where it grows along Harbor Mountain Road a mile or two up). However, there were several cottonwoods growing along Blue Lake Creek above Blue Lake (and I’ve heard they also occur in some of the larger river valleys north of town). In hindsight, it seems like a pretty obvious choice, and I’m not sure why I did not make the connection at the time – except that the leaves were such a different shape.