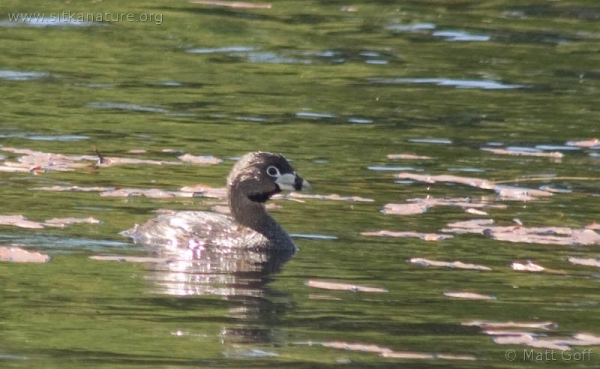 While relaxing on a bench at Swan Lake, I happened to notice an unusual bird pop up to the surface. I wasn’t sure whether to believe it when I thought I saw a Pied-billed Grebe, but after waiting a while longer, I saw it resurface several more times and was able to confirm (and get the pictures seen here) that it was a Pied-billed Grebe. I had previously seen and photographed a Pied-billed Grebe on Swan Lake two and a half years ago. It was interesting to see the differences – this time of year the pied-bill definitely shows up much more clearly.

Like the first one I saw, this one seemed to prefer to hang out among the weeds and avoid being seen clearly. I did manage to get a couple of clear looks, but most of the time I could not find it, and when I did, it was tucked in among the pond-lily leaves. It was favoring the south side of the peninsula while I was watching it today.

Pied-billed Grebes seem to show up somewhere in Southeast Alaska each Fall. They are considered Very Rare in the Winter and Spring seasons, and only Accidental for summer. In Sitka they seem to be Very Rare Fall through Spring, but this appears to be one of a very few (perhaps the only) June (or Summer) record for Sitka. 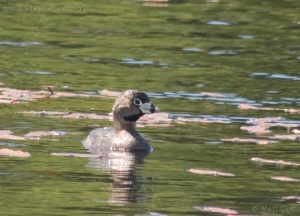 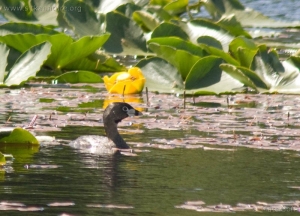 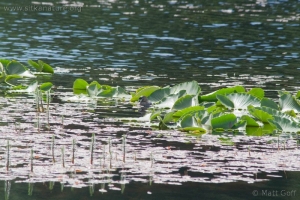 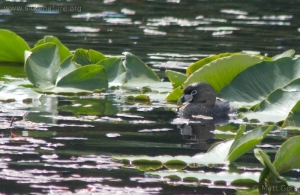