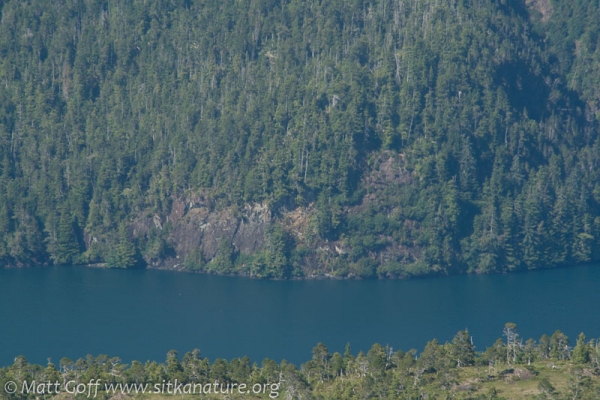 Last summer while hiking on Starrigavan Ridge, I noticed some interesting looking rock outcrops along the shoreline of Katlian Bay. They appeared to be more red in color, and after my experiences at Red Bluff Bay, I wondered if maybe it was an outcrop of similar rock.

It was only a couple of weeks ago I was able to get a ride into the bay to get off on shore and take a quick look. It was definitely a different rock type than the greywacke that seems to be the most abundant rock type close to Sitka. It had a different texture, some surfaces showing a bit of gloss, but others very rough from repeated fracturing. It seemed to fracture very easily, and more freshly exposed rock tended towards dark and/or greenish colors while exposed rock tended more towards brown/reddish colors. I have a very limited understanding of geology, but I associate the name serpentine with what I was seeing (though I suspect that is incorrect).

There was not much in the way of new plant growth, but I took a quick look around to see if there was evidence of anything particularly different looking. It was a somewhat different assemblage of plant species than I usually think of for protected shoreline rocky/cliffy areas. Overall there was nothing that immediately stood out as especially unusual, though I thought seeing Shore Pine (Pinus contorta) away from muskeg-like habitats was interesting. (Despite the common name, Shore Pine is not so common on the shores around here, I have seen it at least one other location – though the shoreline of Kamenoi Point Beach is quite different with volcanic sand predominating and extensive muskegs not far upslope).

It would be nice to get back there in early summer to explore more extensively after the herbaceous plants have had a chance to grow out. There are also another couple of cliffs that are nearby and at least as large as this one, which might be interesting to check out as well.