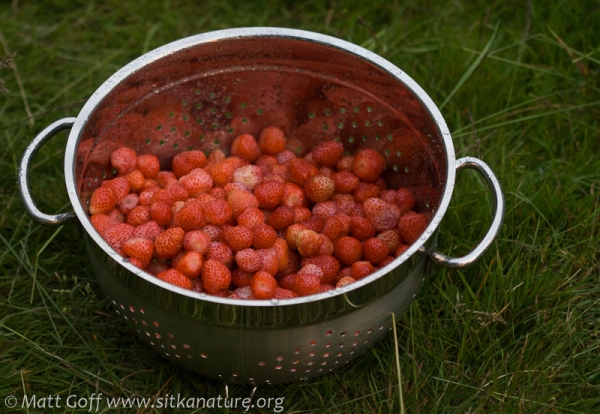 It was a hazy but pleasantly warm afternoon when I rode my bike to check on a patch of feral strawberries that I found a couple of years ago (wild strawberries are in the area, but these are an escaped domestic variety) . Berries were already getting ripe three weeks ago, so I was hopeful that I would find enough to eat a few and maybe bring some home to eat later.

As I approached the patch, I could caught the sweet smell of ripe strawberries warmed and ripened by the sun of the past week. The first berries I found, I ate. Although not large, the berries were exceptionally juicy and sweet, much better than anything I’ve been able to buy in the store. Since I was little, I’ve had the tendency to eat as many as I pick, and the flavor of these berries made it easy to indulge, but that was no problem today, as the berries were abundant, and there were many more than I could possibly eat at once. I was definitely thankful I had taken a detour to grab a bag to collect them in.

No doubt I could have picked the half gallon of berries or so much quicker than the 2 hours I spent, but the peaceful surroundings invited a leisurely approach. I listened to the birds singing and insects flying as I crawled around through the bushes moving aside leaves and branches to find the red berries hiding underneath. Occasional engine noise was the only thing that interrupted the Swainson’s Thrushes, Fox Sparrows, Lincoln’s Sparrows, and warblers who were providing the music. Overall, it was a pleasant way to spend some time, and it’s hard to argue with the results. 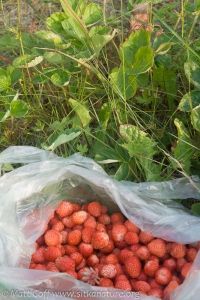 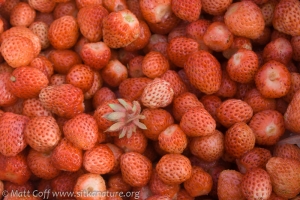