In light of the fact that gathering food is a good way to learn more about the place I live, I have decided to try doing a weekly post on wild foods, featuring a different one each week.

Today Connor, Rowan, and I went for a short walk to collect “wild cucumber” (aka Clasping Twistedstalk or Streptopus amplexifolius). It first comes up as a single stalk which, as it matures, the leaves open up from. When picked early enough, the stalk is tender and has a taste not unlike cucumber. As it gets older, the stem becomes stringy, though the flavor more or less remains the same. The leaves are also edible, though their taste is a little bit different. 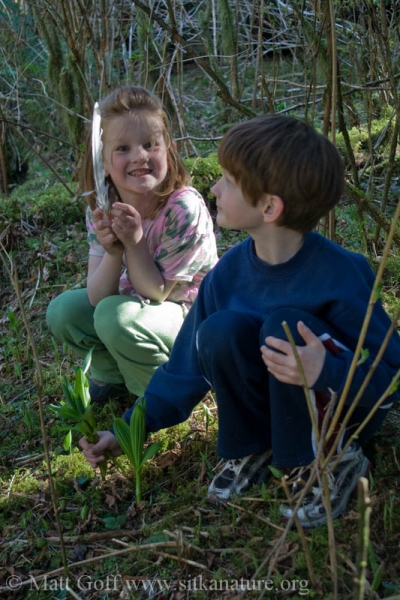 One thing to be aware of is a poisonous plant that looks vaguely similar when young, Corn Lily (Veratrum viride). It was nice that Connor found a young Corn Lily plant so we could compare it and make sure we recognized the differences. 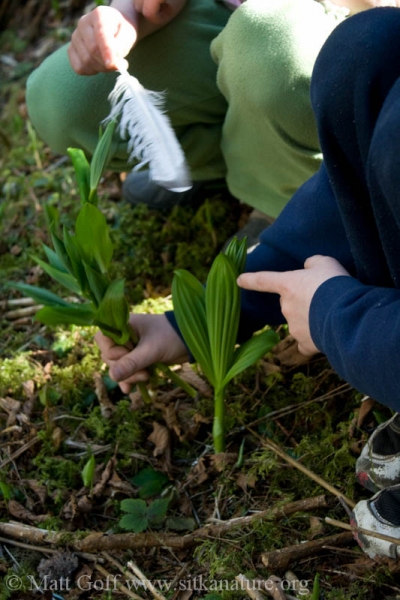 Corn Lily is one of a handful of exceptionally poisonous plants that are native to the Sitka area, so it is a good idea to be sure it does not get mistaken for something you plan to eat. In practice, Wild Cucumber and Corn Lily really are only superficially similar, and with some care and attention, it should be easy to tell them apart. In particular, the leaves of Corn Lily are pleated while the leaves of Wild Cucumber do not tend to be (and if they are, not nearly as much). Also, the arrangement of leaves is different, with Wild Cucumber tending to have a larger clasping leaf lower down on the stem and Corn Lily having only a small one, if at all. Once the plants are mature, they look nothing alike. 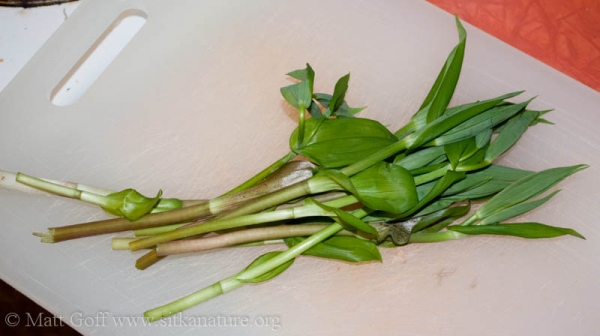 Connor ate some of the Wild Cucumber while we were picking and Rowan tried it but was unimpressed. We prepared it by chopping it up and mixing it with spinach for a green salad. Rowan found it a bit more palatable with salad dressing, but still didn’t really care for it.