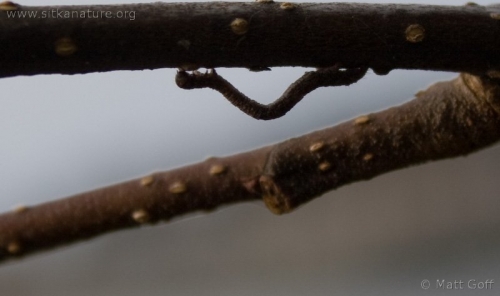 While down at Lincoln Street Beach the other day with Connor, I happened to notice this caterpillar crawling around on the branch of a shore-side Sitka Alder (Alnus viridis ssp sinuata). Later I found a couple of others, though I was unable to relocate the first one. They blend in to the branch quite well, so I was lucky to catch the first one moving. After knowing where to look and what to look for, I was able to find the others even when they were not moving.

I was aware that some species of moths and butterflies overwinter as caterpillars, but I have not previously found any here (not that I’ve been looking), nor did I expect there would be ones that are active in exposed locations through the winter. I’m making the assumption that these caterpillars have been active through the winter, as it hasn’t been so warm in recent days that I would expect things to decide winter is over. In any case, it seems likely that these caterpillars have a reasonable tolerance for freezing conditions. I found them on the ends of branches with no cover, so night-time temperatures on cold days would almost certainly get below freezing. I don’t think they could crawl back down the tree fast enough to take shelter in the dirt, but I could be wrong about that, I suppose.

There is some question in my mind about what these are eating. Given where I found them, it seems likely they are eating some combination of bark, buds, or developing catkins on the alders. It also seems possible, though unlikely, that they are just hanging out, but not eating, for the winter waiting for the leaves to emerge in the spring. If this is what they are doing, I see little advantage to being active at all over the winter, in fact, it seems like it would be a big disadvantage due to increased chance of death due to weather or predation. On a bud not too far from one of the caterpillars I found, I did notice a little bit of damage on a leaf bud. It could have been from a caterpillar chewing on it, but I’m not sure whether it was or not.