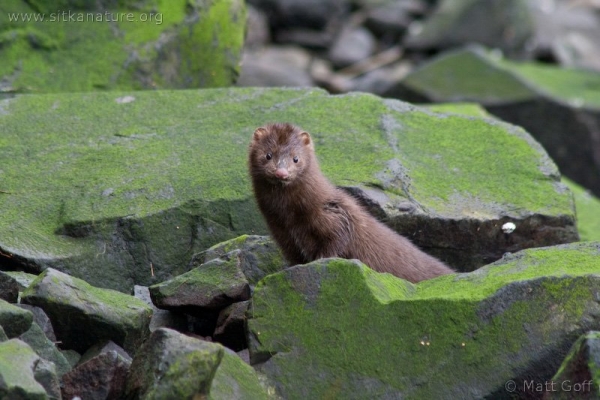 On a recent walk to Totem Park, I happened to spot a Mink (Neovison vison) moving around on the cobbles at the edge Indian River where it runs through the upper portion of the estuary. Connor and Rowan were with me, but had taken the path through the woods rather than along the estuary, so I called them over to come look. Fortunately it stayed out in the open long enough for them to get a good look (what Rowan had to say about it).

Watching the mink, it was not clear to me what exactly was going on. The mink was sort of pawing about in cobbles, and I presume it was looking for food. It seemed pretty far up to me for there to be crabs or anything under the rocks, and I did not actually notice any rocks being turned over. I am not sure what else might have been there that a mink would consider food, especially this time of year.

Periodically the mink would run to some nearby larger rocks where it seemed to be taking cover. It would poke its head out occasionally during the minute or two it stayed there, then go back to the cobbles. After doing this a couple of times, it finally seemed to wary of something (maybe us), and when it went to the rocks, it acted like it would be moving along. I thought it might come out beside one of the bigger rocks, but was a little surprised to see it running along the rocks some distance away. It must have passageways through the larger rocks that allow it to remain concealed.

We walked down the trail further, and I kept a look out to see if it would come out in the open again. I finally saw it running up in the grass and then it made a mad dash across the grassy area to a line of trees on the river bank. The ground under the trees seems to be somewhat dug out and/or well-travelled, so I suspect mink and/or otters spend a fair bit of time there. I am uncertain whether the mad dash was an account of us, or if it was a fairly typical way for the mink to move across the opening where it would presumably be exposed to things like Bald Eagles (which I imagine would catch and eat a mink if they had the chance). I suspect it was mostly because of us. 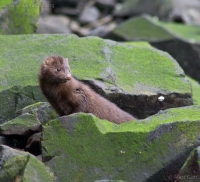