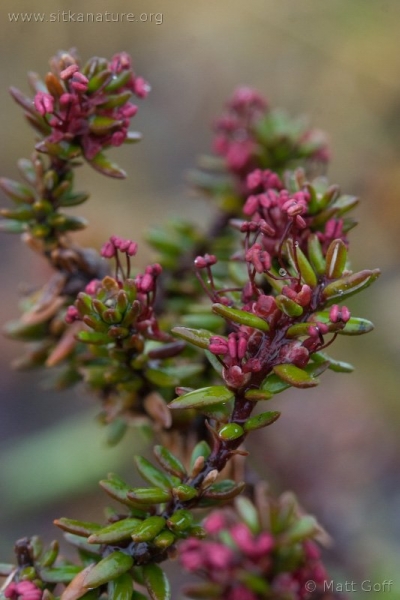 Crowberry (Empetrum nigrum) is a common species that can be found from sealevel to lower alpine meadows. This species seems to do well in places where conditions are open and dry. Mostly I’ve noticed the plants growing in muskegs (on the hummocks) and lower alpine meadows, but I’ve also seen them growing on moss covered boulders along the shoerline just above the splash zone (though you do not see that habitat along the road system).

By late summer it is usually not difficult to find the closely attached dark berries fully ripened. I’ve tried eating them on a couple of occasions (typically in the lower alpine habitat) and was not particularly impressed with the flavor, so on the occasions when I’ve seen them so thick I could have run my hands through the patch and come away with a handfull of berries in each pass, I was not at all tempted to stay and pick them.

Over the last few years, I have wondered about the flowers. When I first tried to find them in summer, I found green berries, but no flowers. In mid-May 2006 I found what I thought might be a single flower. However, there was so little there, I was not at all confident about this, especially considering there was only one potential flower, and the actual berries were often quite abundant. Last year I finally did see some flowers in late April and then found berries already well along by late May in a low elevation muskeg. Then in July on Mt Verstovia, I took the picture that leads this entry. 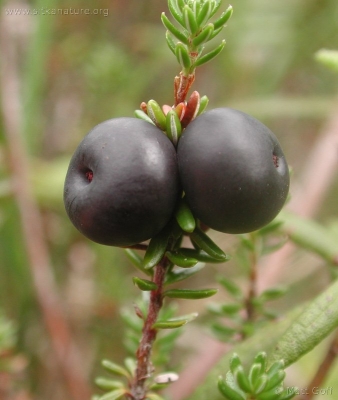