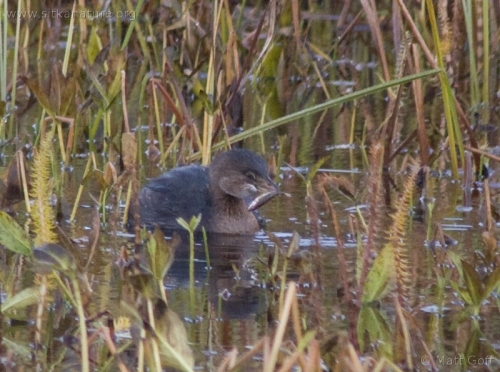 When I first arrived on the penninsula at Swan Lake this morning, it seemed pretty quiet. The usual crowd of domestic Mallards and followers were down near the outlet stream, and there were just a few Mallards on the penninsula. These seemed unusually flighty, or perhaps my mood was such that I seemed more threatening than normal. On my first look around the lake, I noticed a few scaups, but none of the other less common birds that have been on the lake in recent days/weeks. I wondered if the coots were still there, and on a second look, I saw one resting in the weeds on south side of the penninsula. I also noticed quite a few scaups at the upper end of the lake. It was too far to tell, but I think there were probabaly Ring-necked Ducks in the mix as well.

In the past, I have found that spending a few minutes waiting will often reveal birds I might not have otherwise seen. Sometimes they fly in while I’m there, other times it seems that I just somehow overlooked them at first. The benches were wet, so I just stood around waiting and watching.

After a little while I saw a bird south of the penninsula moving around in the remains of the pond-lilies. My first impression was the head looked like the first-year Hooded Mergansers I had seen before. My first look at the bill was a firm rebuff of that idea, however. I realized then that I was looking at a Pied-billed Grebe. Though I had never seen one before, I knew what they looked like from repeated forays in the bird guides.

In hindsight, I think the ‘resting coot’ I thought I saw was probably a resting grebe, as shortly after noticing the grebe, I saw the two coots that have been on the lake down toward the lower end of the lake. They do have similar body shapes, though when they are swimming about, it’s pretty easy to tell them apart. I think my expectations are the main reason I was able to initially miss the new-to-me bird.

I spent a half hour or so watching the grebe swim around in the shallows. It seemed very effective at swimming underwater. I could usually follow its rapid progress underwater by the movement of emergent vegetation it passed. On several occasions when it popped back up to the surface, it had a small fish in its bill.

After fishing, stopping to do some preening, and then some more fishing, the grebe settled in to rest. When it tucked bill under wing, it almost seemed to disappear. Although it was not overly far from where I was standing and I knew where it was, I still needed the binoculars to pick out where it was resting among the pond-lily stems, marestail, and sedges.