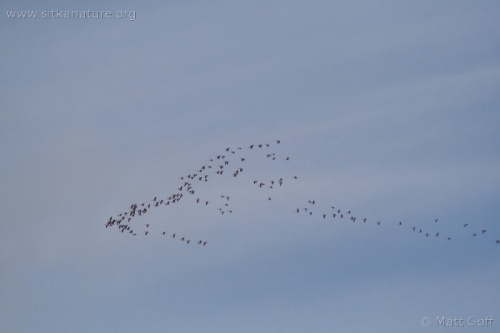 After yesterday’s storm, I decide it might be worth wandering around to see if any unusual birds blew in. I stopped by Swan Lake, Moller Park, and then went through the Turnaround area to Eliason Harbor.

Weather: On the ground winds were calm, but this morning I noticed the high cirrus clouds moving rapidly across the sky toward the west. It remained partly cloudy through the day and into the evening. A lower layer of broken thick clouds did not seem to be moving much at all. I did not notice that it rained that hard last night, but the Path of Hope trail was significantly eroded, so it must have rained very hard there within the last day or two, as there was no sign of erosion the last time I was there.

Birds: It was fairly quiet for birds today, overall. I saw the Cackling Goose and both American Coots were still at Swan Lake. I also saw Ring-necked Duck, scaup, one Northern Shoveler, and an American Wigeon.

On the way to Moller Park I observed a Steller’s Jay. It made some typical jay calls, but also had a couple of unusual ones mixed in.

At Moller Park I only noted Dark-eyed Juncos along the Path of Hope.

On the little trail between the Turnaround and Eliason Harbor parking lot I saw more juncos, at least one Song Sparrow and a Golden-crowned Sparrow. I also saw 7 Common Mergansers on the water. The rocks in front of the Turnaround had several gulls, including a Black-legged Kittiwake.

At the harbor I saw a first year Bonaparte’s Gull, a couple of Song Sparrows, including some singing. The singing birds were out at the end of the harbor, which makes me wonder where they nest. I assume it must be on/under the dock, rather than on a boat. If I think of it, maybe I will try to track a nest down next spring/summer.

The Bonaparte’s Gull puzzled me at first. I had not seen a first winter bird previously so it was not immediately familiar. It flew different than gulls I typically see. It was graceful, but erratic as it made long looping flights over the water punctuated by sudden drops into the water to grab a small fish. This seemed fairly effective as I saw it catch more than one fish.

There were gulls scattered about, including several Black-legged Kittiwakes, Thayer’s Gulls, Glaucous-winged Gulls, and Mew Gulls.

There were quite a few crows on the dock taking advantage of the barnacles and other invertebrates that get scraped off the pilings onto the dock. As the dock moves up and down each day with the tides, it’s not clear to me how these invertebrates have a chance to attach and accumulate in the first place. I guess that the piling must usually only scrape along one part, but occasionally the dock shifts and another part gets scarped.

Lots of geese flew over this morning. At a minimum I saw several hundred. The flock I counted had over 200 birds. The ones I could see well enough to identify were Canada Geese.

While riding home with Rowan after picking her up from preschool, I noted a Wilson’s Snipe fly up from a yard at the edge of Etolin Street as we approached.

Other Notes: While I was sitting on the dock watching (for) birds, I was startled by a splash right below me. When I looked down, I just caught the tail of a fairly big fish swimming under the dock. I’m not sure what it was, but it seemed like it must have been close to a couple of feet long or more, based on the part I saw. 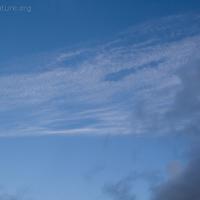 The upper level of clouds was moving quickly from West to East (left to right in picture), while the lower clouds remained mostly stationary. 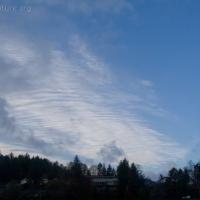 The upper level of clouds was moving quickly from West to East (right to left in picture), while the lower clouds remained mostly stationary. 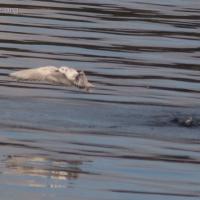 This first winter Bonaparte's Gull was observed feeding at Eliason Harbor 22 October 2007. Here it has just taken off from a quick landing to grab a fish. 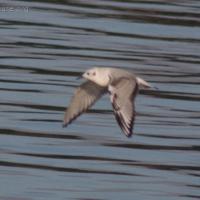 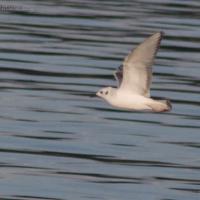 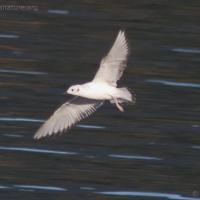 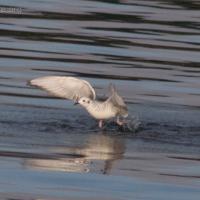 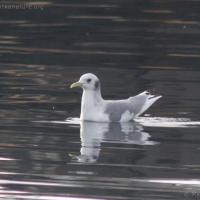 This was one of several kittiwakes in the harbor area. 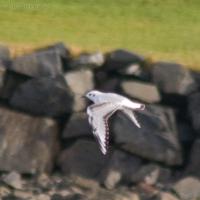 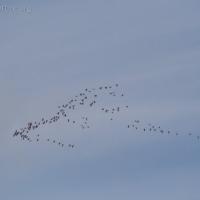 This was one of several flocks of migrating geese that flew over this morning. These are Canada Geese. 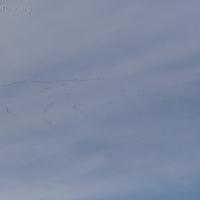 This was one of several flocks of migrating geese that flew over this morning. I counted over 200 in this flock. 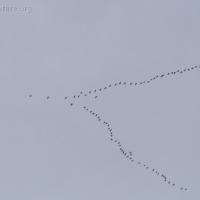 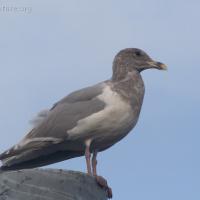 I was struck by how extensive the 'streaking' is on this bird. I haven't worked out what species it is yet. 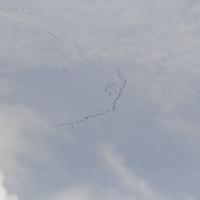 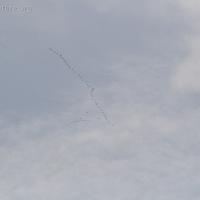