This morning I took Rowan to Swan Lake before dropping her off at preschool. It seemed like a nice day and it has been awhile since I was out kayaking, so I decided to go for a paddle. I ended up paddling over to the other side of Eastern Channel, over toward Cobb Island via the Twins. I did not get right up on the shore, but went a little bit towards Camp Coogan before paddling back past the green buoy to Totem Park, then along the shore to the hatchery.

It was probably the longest paddle I have done since I started kayaking a little more consistently last fall. Although on the way back it seemed like I was paddling through jello and making very little progress while I was out away from everything, my new skin on frame kayak must be at least a little faster than the other one I’ve paddled. Even though I stopped a few places to look at birds, I made it back from the other side of Eastern Channel to Sage Beach in under an hour. I did not have a GPS or anything, so I don’t know exactly how far it is, but I think it’s about three miles. I guess the feeling of making no progress happens when I’m far from everything and it’s more difficult to tell how far and/or fast I have actually gone.

Later this afternoon, Connor and I walked down to Totem Park.

Weather: It started out sunny, but high overcast moved in as the morning went on. I could still see a bright spot in the clouds for part of the time I was kayaking, but the skies became more uniform by the time I headed back. This afternoon when Connor and I were out, thicker, though less uniform, clouds had moved in. There was a little breeze blowing out of the Southeast when I was paddling out, but it had died down on my way back. It was interesting that there seemed to be little swell/surge when I left, but coming back three hours later, there was a much stronger wave action on the beach. The tide was coming in and was quite high when I returned, but I do not know if this had anything to do with the amount of wave action. It was actually fairly breezy when Connor and I were at the park early this evening. There was a little bit of rain this afternoon, then more consistent rain started falling later this evening.

Birds: At Swan Lake this morning there was an American Wigeon. I also saw a Hooded Merganser fly in and what I think was a Spotted Sandpiper (based on its size, color, and flight) trying to land on some of the remaining pond-lily leaves.

There were a few robins around the house this morning, but they did not seem to stick around long. I happened to catch the Steller’s Jay outside, and enticed it with some peanuts. It hopped within a couple of feet to grab peanuts that I had tossed down, but would not get any closer. Much like the jays last year (I do not know if this is one of the birds we saw last year), it will take the peanuts and cache them. Later in the day, I saw it retrieve a peanut it had cached in a hemlock branch and fly off to eat it.

Dark-eyed Juncos have returned to the neighborhood. They’ve probably been here awhile, but I finally paid attention to that fact today.

While kayaking I did not see too many birds. There were a few Murres on the town side of Eastern Channel and a few scattered gulls. I think i saw a White-winged Scoter flying out Eastern Channel, and I observed several Harlequins in a few different small flocks flying from the direction of the park towards the south as I was on my way to the Twins. On the way back, I saw four Surf Scoters off Jamestown Bay. There were quite a few Black-legged Kittiwakes off of Totem Park, and I saw one Marbled Murrelet off the park. I also saw several Pelagic Cormorants in Crescent Bay going and returning.

At the park this evening there were several Black Turnstones that let us approach fairly close without concern. We heard a few Chickadees in the forest, and there were lots of gulls scattered along the beach, most of them by the river mouth and in the estuary (the tide was out, so flats in the estuary were exposed). We did see the Slaty-backed Gull. I also saw the Ruddy Turnstone and 4 American Wigeons.

Mammals: There were several whales in two groups in Eastern Channel. The larger group was in toward the mouth of Silver Bay. The other group, which seemed to consist of two whales, was more out in the middle. I got much closer (though not too close for comfort, fortunately) to this smaller group. Either the group at the mouth of Silver Bay was not staying down nearly as long, or there were multiple whales staggering their breathing more, as I saw breath spouts far more often from that group. The two I was closest to would stay down for several minutes before coming up to breathe. They actually appeared to be heading out about the same time I started back to town. One of them went out Eastern Channel toward the sound, then a few minutes later the other one did also.

I saw a couple of Steller’s Sea Lions off the park when paddling back to town. There was a gray headed Harbor Seal not too far off the beach when Connor and I were there. (Which reminds me, I have been seeing seals from the park fairly often the last few weeks, but seem to forget to mention them in these entries.)

Other Notes: The tomato plant has been overtaken by the tides. I couldn’t find evidence of it when Connor and I were at the beach today. 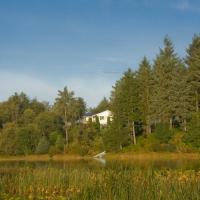 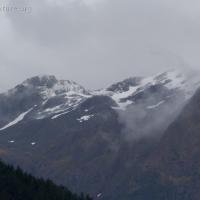 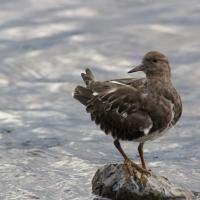 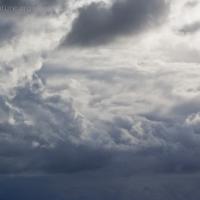 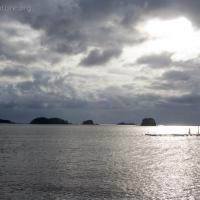 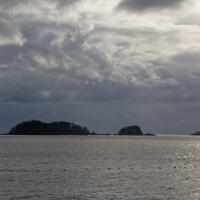 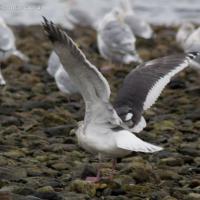 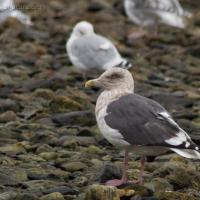