I took Connor to school this morning, then stopped by Swan Lake before going home. After Connor got back from school, he, Rowan, and I went down to the park. Rowan was a rather reluctant participant in the outing, so after she needed to come home to go to the bathroom, Connor and I went back.

Weather: It was a dim, wet day, though the wind was pretty much gone. There were periods of time when it didn’t rain, but the second time we went down to the park, it dumped on us. There was even some sleet/ice pellets mixed in for a little bit.

Birds: I did not see the white-fronted geese at Swan Lake this morning, though the Cackling Goose was still there. I also saw a Cackling Goose at the park (it was definitely a different bird, as the white marking on the face was brighter and larger).

There were quite a few Black Turnstones scattered about, though mostly we saw flocks flying over.

On the first trip to the park we made it down to the end and I had a chance to look at the gulls there only briefly before taking Rowan home. There were quite a few Black-legged Kittiwakes along the water’s edge. Someone later reported counting over 60 of them, but I don’t think there were that many when I was there. On the second trip, the kittiwakes were gone. The tide had gone out even further and, though there were lots of gulls, they were fairly spread out. Heavy rain hampered visibility, but I did not notice anything out of the ordinary.

The heavy rain also made it hard to distinguish the ducks, but there were quite a few Mallards, mostly out on the gravel bar between the current river channel and the old channel. I also saw at least one Northern Pintail, 4 American Wigeon, and 4 Green-winged Teal.

I saw two Red-necked Grebes off shore of the battlesite. These are the first I’ve seen this fall, though I talked to someone who had seen a couple at Starrigavan in the last week or so.

I noticed a Winter Wren in the park again today. Someone mentioned to me seeing wrens on Chicken of the Woods a couple of times lately.

Other Notes: The tomato did not quite get hit by the tide today.

Indian River was running fairly high, but it seemed much more clear than yesterday. Perhaps rains of yesterday washed the bulk of the free mud out. 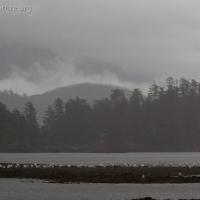 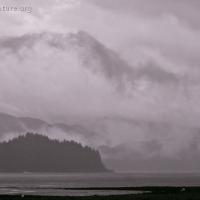 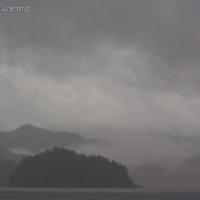