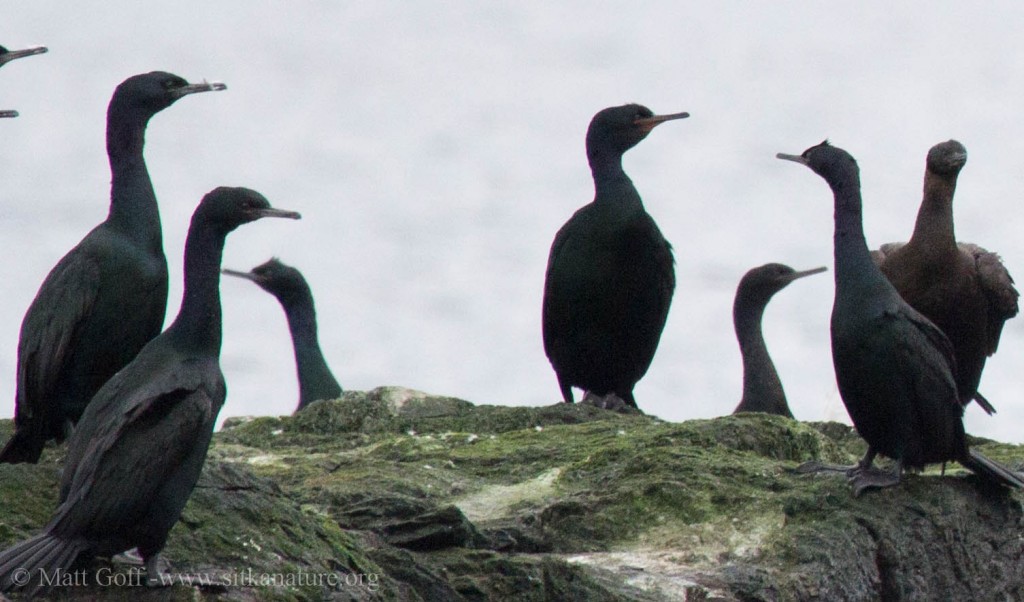 See below for update

Last Sunday I took these pictures of cormorants on a rock at the junction between Krestof Sound, Nakwasina Passage, and Olga and Neva Straits. At the time I didn’t notice anything particularly unusual, just thought I would grab photos to take a closer look later. Upon reviewing the pictures at home, I noticed one cormorant that looked different than the others. I am not certain what species it is.

It stood out initially because of the color on the lower base of the bill – at first I thought perhaps it just had something near the top of its throat that was stretching things out, but as I considered it more, I became less convinced by that explanation. It could be the angle, but the bird seems to be a bit more robust in head and neck than the surrounding Pelagic Cormorants. The bill also seems distinctly more yellow to me.

Double-crested Cormorants are not uncommon around here, but I would expect them to have a bill that was clearly thicker and more yellow than this one. Red-faced Cormorant (of which there are only a couple reports from Sitka – their range is west of year) should have red on its face, which this one doesn’t have. The other species to consider is Brandt’s Cormorant. They can be fairly abundant at times in southern Southeast (in the Ketchikan area, for example) – but their status in the Sitka area is a bit murky. Brandt’s Cormorants as shown in the field guide have a pale bit just at the top of the throat which doesn’t seem particularly in evidence on this bird. However, other photos I found on-line don’t always have that pale patch showing clearly, so that’s not necessarily a deal breaker.

At this point I’m uncertain whether this individual is just an odd looking Pelagic Cormorant or something else. I would welcome any comments one way or the other. 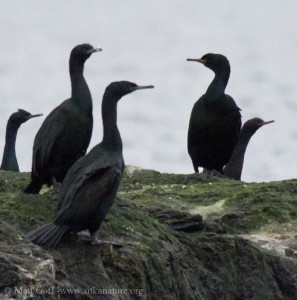 Update: For some reason I forgot that Pelagic Cormorants develop more than just a white patch during breeding season. I guess I haven’t actually seen that many in full breeding (they tend to hang out more in less protected waters during the summer) – but I do have a photo of one that is included below. In any case, it was pointed out to me by S. Heinl that this odd cormorant is probably just getting color in its face – it’s just an early developer compared to its peers, apparently.