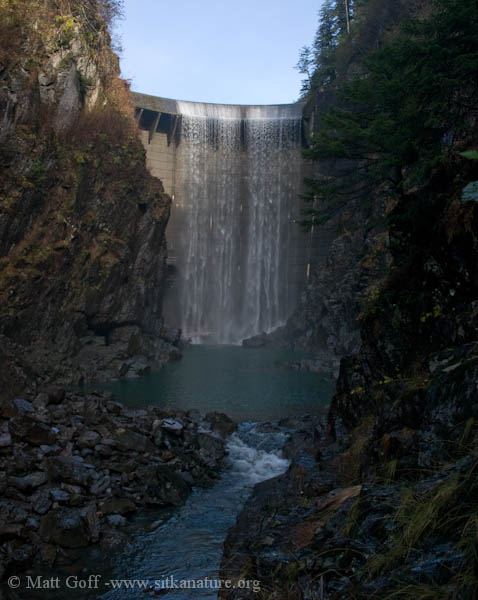 Last week I wrote up a post about discrepancies in 2011 precipitation data for Sitka and speculated a bit on possible explanations – both for the discrepancies, and what was seeming to me like a normal amount of precipitation for the year, but low amounts of water in the reservoirs. This post is a follow-up to that one – as I received an e-mail from Kimberly Vaughan of the NWS office in Juneau in response to an e-mail I had sent asking about the discrepancy.

She chased down the data and indicated the NOWData was mostly correct and provided correct values for the four months in the Alaska Climate Database which were incorrect as well as a year-to-date total as of the time of my prior posting:

The 79+ inches so far appears to be fairly in-line with average over the long terms, and a bit above average for the past 10 years (if I’m reading the records correctly).

That being the case, I am back to speculating (mostly because I find it an interesting question to think through) on possible reasons the water level is so low. I’m working under the assumption that power demand has been pretty typical (it was recently reported to be stable over the past 4 years, I think – so this seems reasonable) and that average amounts of precipitation will be adequate to generate sufficient power for Sitka’s current demand (from everything I recall seeing – this is currently the case, though it won’t be too many more years, if projections of increased demand hold, before only above average amounts of precipitation would be enough to meet the annual power needs).

Since I posted last, I have thought a bit more about the situation, had some conversations, and did a bit more digging into the data. I was told that last fall (fall 2010) water was spilling over. Last fall/early winter (Oct-Dec) was about 10 inches below average, and that was on top of an already drier than normal Jan-Sept (also down about 10 inches from average, as best I an tell). Last fall/winter also had less snow than typical (even considering the lower precipitation amounts) – that is, what precipitation we did have tended to fall more as rain than snow, even at moderate to higher elevations. While this fall has seen fairly normal amounts of precipitation, a bunch of it has fallen as snow (at least in November – it’s warmed up recently, with snow levels rising to 2000 feet or more). Given all of this, I have come up with the following possible explanation.

I think in most years, snow probably starts accumulating significantly at higher elevations by late October or sometime in November. At this point, the precipitation falling above the lakes will contribute to the next calendar year (or possibly even further out) – as it will not be caught up behind the dams until it melts. (I guess this is why it makes sense to consider the water year to go from 1 Oct-30 Sept, as the USGS does.) Last fall, warmer temperatures meant more of the precipitation was falling as rain above the lakes – it was immediately running off and raising levels behind the dams with water that in other years may have not flowed in until the following summer. This year’s November precipitation fell as snow down to sea level, so very little of it would be raising levels behind the dams. Another possibility is the low precipitation for 2010 may have taken a significant chunk out of the multi-year snow pack, making less snow pack available overall for 2011. Although I don’t believe it’s been consistently measured (if it’s been measured at all), it would be an interesting piece to the puzzle to know how snow depth has varied over time at various locations.

I think there are some other potential factors as well. One I mentioned before is the possibility that, despite being normal at the airport, precipitation totals were down in the Blue Lake and Green Lake watersheds (which I mentioned as a possibility last time). There may be precipitation records for Blue Lake, and it would be interesting to see how those compare with the airport over time. My guess is the day-to-day correlation would be moderate (perhaps even low, if you limited it to days with measurable precipitation), but the yearly correlation would be pretty strong. Another possibility is the low water this year is due in part to years even earlier than 2010 (due to multi-year snow deposits).

Further investigation could be done by going further back in the weather records and making some guesses/assumptions about the temperature at sea level, precipitation amounts, and what elevation snow was falling and/or how fast it might have melting during a winter warm spell, as well as getting other precipitation or water level data from the dams. Perhaps at some point I’ll be ambitious enough to try to look into it further over a longer-term period, but I’m reasonably satisfied for now as I think the 2010/2011 rain/snow explanation provides at least a plausible, if not 100% complete, story for why water levels are low this year despite typical rainfall and power demand.