Pied-billed Grebes are Very Rare in spring around Sitka, so I certainly was not looking for this bird to show up when we briefly stopped to take a look at the birds on Swan Lake this afternoon. I probably would have missed it entirely while I was checking out the ducks with my binoculars if it hadn’t been for Connor’s excited pronouncement that he had seen a Pied-billed Grebe. I looked up from my binoculars and didn’t see anything except the mallards, scaups, and a single male American Wigeon. Thinking that perhaps he had somehow mistaken a female scaup for a grebe, I asked him where exactly he was looking, but before I could get a zero in on what he was seeing, he told me the bird was now underwater again. After a few moments he saw it pop up and was able to direct my attention to it. Sure enough, it was a Pied-billed Grebe. This time it stayed on the surface long enough for me to get a couple shots for documentation.

Despite the rarity of this species in the area, just last June I found a Pied-billed Grebe on Swan Lake. It may have been the first June observation of this species in Sitka, and ultimately led to the first confirmed breeding record of the species for the Sitka area (and one of only a small number for the entire state). It seems interesting that it’s now two years in a row, and makes me wonder if this bird will find a mate and nest on the lake this year. However, I’m have my doubts since it may still be early enough that this bird is simply moving through on migration.

The graphic below shows the weeks between 1981 and 1999 when a Pied-billed Grebe was reported in Marge Ward and Marlys Tedin’s birding records. 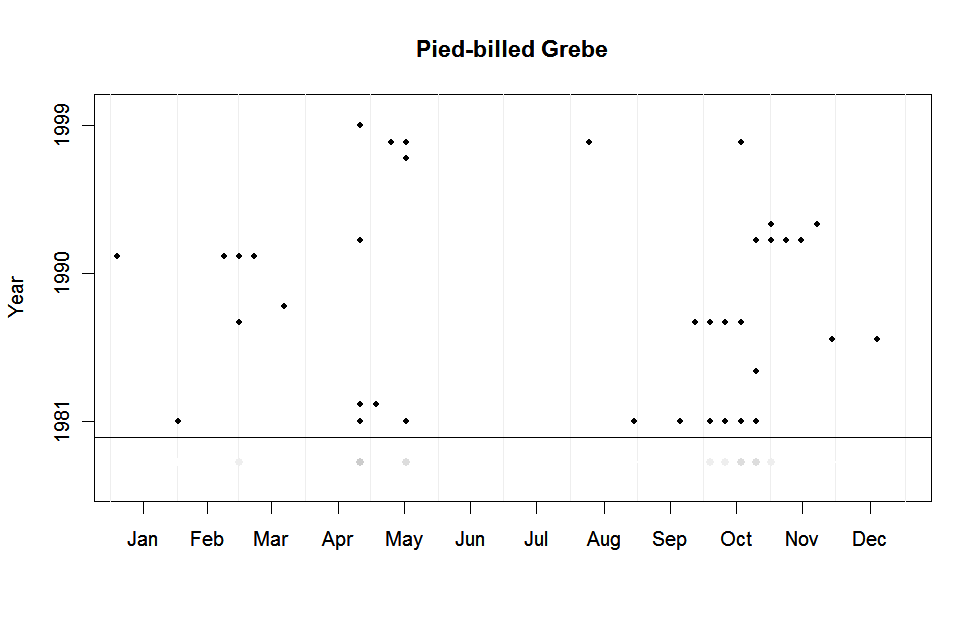